"I really enjoyed this guide. I was able to work independently and I loved the Genevieve Foster books. Furthermore, I was able to incorporate the writing prompts into my writing program and the questions were well thought out. I would definitely recommend this to anybody." An 8th grade student's review

Our Early American and World History program is designed for students in 7-9th grade and features some of our favorite titles. Designed as a one-year study, students read books by award winning authors like Genevieve Foster, James Daugherty, Esther Forbes and Jean Lee Latham. The study guide features reading assignments, comprehension questions, vocabulary lists, report topics, an answer key, and much much more. Spanning a period from the 15th century to the US Civil War, students will learn about key events and people in American history as well as events like the French Revolution, the discovery of Japan, the exploration of Africa, and a world that was changing rapidly as explorers pushed the boundaries of the known world. Here are more detailed descriptions of each book featured in the Early American and World History study guide.

The World of Columbus and Sons by Genevive Foster is the story of a wonderful, changing, reawakening world—the world of the Renaissance and Reformation. Measured by the lifetime of Columbus and his sons, this book spans the years from 1451-1539. With Columbus as the central figure of this narrative, readers will also learn the fascinating stories of Prince Henry the Navigator, Ivan III of Russia, Gutenberg, Queen Isabella, Leonardo da Vinci, Mohammed II, the African ruler Nomi Mansa, Martin Luther, Erasmus, Albrecht Dürer, Copernicus, Michaelangelo and many others. Told in Foster's engaging and winsome style enhanced by her helpful chronologies and timelines, readers will learn of the religious, cultural and scientific changes that ushered in a new frontier of exploration and discovery.

Next you will discover The World of Captain John Smith also by Genevieve Foster. Spanning the years from 1580-1631 the life of the adventurous John Smith gives a picture of the world just before and during the colonization of America. When Smith was a boy, Shakespeare was on his way to London to become an actor, the Spanish Armada had failed to conquer England, Mary Queen of Scots had lost her head, and Akbar the young prince of India sought to rule his people wisely. Galileo was perfecting his telescope and seeing things never before seen by the human eye, while Pocahontas romped the forests of Virginia and saved a young Englishman's life. A little band of Pilgrims seeking to escape religious persecution in England fled to Holland and a little Dutch boy named Rembrandt began to paint. These are just a few of the intriguing personalities, events, discoveries, and advances that made up the world of Captain John Smith and are now made alive to the reader in Foster's masterful way.

Next your student will explore the American colonies with several wonderful books including Poor Richard by James Daugherty. This lively text exemplifies both the man and the artist. Benjamin Franklin lived in turbulent times and met those times head-on with passion and gusto. James Daugherty—ever the patriot himself—has captured that essential nature of Franklin in his energetic and dramatic three-color lithographs that reveal the neophyte as he faces the fresh soil of a young nation filled with optimism and promise. From his Quaker childhood to his early days as printer's apprentice to runaway, to stranger in the City of Brotherly Love, to the "Water American" in London, Ben's youth was filled with adventures and challenges that taught him invaluable lessons about human nature. These lessons would serve him well as he grew to be a leader of the young colonies as they faced the tyranny of Britain. As a leader in the American Revolution he was indispensable as an ambassador to England and later France where he won the hearts of the nation by his simple Quaker wisdom and geniality. All these things were accomplished while he pursued his interests as scientist, inventor, and prolific author. In everything he did, Franklin was always compelled by how he might best serve his fellow man.

One of the best-selling American classics of all time is Johnny Tremain and your student is sure to enjoy the adventures of mischievous Johnny as he takes on the British redcoats. It's a story filled with danger and excitement, and the turbulent, passionate times in Boston just before the Revolutionary War. Johnny, a young apprentice silversmith, is caught up in a dramatic involvement with Otis, Hancock, and John and Samuel Adams in the exciting currents and undercurrents that were to lead to the Boston Tea Party and the Battle of Lexington–and finally, a touching resolution of Johnny's personal life.

The story of how the United States became an independent nation is vividly told in The Great Little Madison. Telling the story of the "Father of the Constitution", author Jean Fritz paints a vivid picture of this fascinating man as well as the government he played such a key role in establishing. Students will learn not only of the reasons why the colonies rebelled from England, but also how the founding fathers developed the US system of government. Fritz brings to life the vigorous debates in Independence Hall, the strong convictions, and the compromises. This book provides a wonderful introduction into government history and political theory for young readers.

George Washington's World provides more history of early America and it's struggles for independence and its formation as an independent country but it doesn't stop there. The period measured by the life of George Washington—1732 to 1799 —was one of revolution and change in many parts of the world as Enlightenment thinking took hold in the minds of men. When George was a young man, Benjamin Franklin was the most well-known American, Louis XV was on the throne of France, and George II was king of England. Father Junipero Serra had just arrived in Mexico to work with the Panes Indians. Mozart and Bach were writing their immortal music and Voltaire warred with his pen against Ignorance, Injustice and Superstition. The young nobleman Lafayette watched the feisty American colonies with fascinated interest as they stood up to Mother England when she sought to tax them unfairly. James Cook was sent by the Royal Society of London to Tahiti where their team of astronomers might observe a total eclipse of the sun and thereby accurately measure the distance between the earth and the sun. These are just a few of the wonderful narratives explored by Foster in her Newbery Honor Book of 1940. Prolifically illustrated with intriguing line drawings and detailed timelines, Foster's telling of the life story of George Washington does justice to the man it celebrates.

Back in the US, a young mathematician was going to revolutionize the world of navigation and your students will get to learn all about this fascinating young man in Carry On, Mr Bowditch. Readers today are still fascinated by "Nat," an eighteenth-century nautical wonder and mathematical wizard. Nathaniel Bowditch grew up in a sailor's world—Salem in the early days, when tall-masted ships from foreign ports crowded the wharves. But Nat didn't promise to have the makings of a sailor; he was too physically small. Nat may have been slight of build, but no one guessed that he had the persistence and determination to master sea navigation in the days when men sailed only by "log, lead, and lookout." Nat's long hours of study and observation, collected in his famous work, The American Practical Navigator (also known as the "Sailors' Bible"), stunned the sailing community and made him a New England hero.

The turn of a century sees much change in the young US as well as an unparalleled opportunity. Of Courage Undaunted by James Daugherty tells of the remarkable expedition of Meriwether Lewis and William Clark on their 3555-mile trek from St. Louis to the Pacific Ocean. Taken largely from original accounts of the expedition, Daugherty has written in his simple, forceful, and lyrical way to evoke the drama and pathos of what was one of American's most daring journeys of discovery. Commissioned in 1803 by President Thomas Jefferson to explore and open up this vast territory, Lewis and Clark felt it was the realization of a lifelong dream. Against the hardships of the wilderness, possible attack by hostile Indians, sudden blizzards and terrifying natural obstacles, these two men led a Corps of Discovery ably and nobly to complete their mission. Their Corps included American Indians from the Sioux, Mandan, Shoshone, Clatsop and Chopunnish tribes as well as one black slave named York. Sacajawea—the only woman on the trip—was a Shoshone who contributed invaluable service as interpreter and guide. Daugherty's evocative sepia and black ink illustrations depict individuals of humor, vitality, passion, and strength.

The course concludes with Abraham Lincoln's World in which Genevieve Foster once again relates the life of a great American and tells what was happening all around the world during his lifetime. Thus, while Abe Lincoln was a boy roaming the woods of Kentucky, Thomas Jefferson was completing his eighth year as president, George III reigned in Great Britain and Napolean was about to meet his Waterloo. Beethoven and Sir Walter Scott were at the height of their creative powers, while Victor Hugo was staging plays at school. By the time Lincoln was old enough to help his father chop wood, other young boys and girls were being prepared for the future parts they would play. Harriet Beecher was reading anything she could get her hands on, Charles Darwin was collecting toads, crabs and shells, and the impoverished boy Dickens was working in a shoe blacking factory in London. When Lincoln opened his shop in Salem, David Livingstone was opening up deepest Africa, and thousands of Americans were opening up the West on the Oregon Trail. The spirit of freedom was moving around the globe as the abolitionist movement gained power in the States and serfdom saw its demise in Russia. Technologically the world was bursting with the invention of the telegraph, the railroad and the steamboat. With her whimsical and informative illustrations and timelines Foster has magnificently captured a remarkable age and a remarkable man.

We hope this gives you a good idea of the wonderful reading adventures that are in-store for the student who chooses our Early American and World History study. Please let us know if you have any questions in the comments section! And if you've completed this study, let us know what you thought. 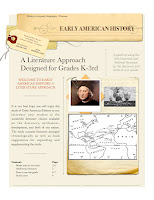 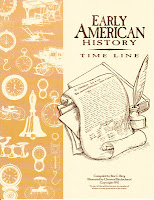 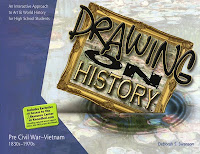 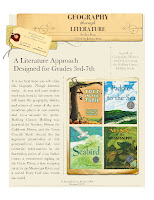 Don't forget to check out our Facebook and Pinterest pages. And if you've enjoyed this, please feel free to share using the buttons below!
Email ThisBlogThis!Share to TwitterShare to FacebookShare to Pinterest
Posted by Rebecca Manor at 11:28 AM