Email ThisBlogThis!Share to TwitterShare to FacebookShare to Pinterest
Posted by Rebecca Manor at 9:00 AM No comments: 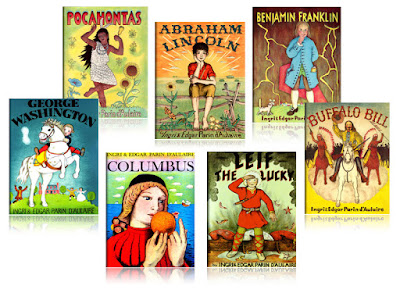 From July 5th to July 15th you can purchase the award-winning d'Aulaire biographies for only $10.00 each! These are the books that inspired our venture into publishing over 20 years ago. Beautifully illustrated, impeccably researched, these books belong in every home schooling family's library. Normally priced at $17.95, you can choose any title for only $10.00 starting Tuesday, July 5. The sale will run to July 15.

If you don't know about the d'Aulaires, here's some information on their amazing story: 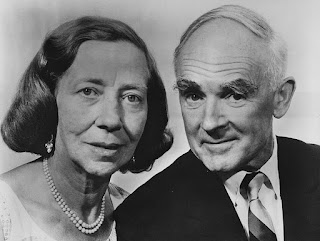 The beautiful books of Ingri and Edgar d'Aulaire have been loved for generations of young readers and are one of the reasons Beautiful Feet Books exists today! At the beginning of the Berg's homeschooling journey it was the discovery of Leif the Lucky, Abraham Lincoln, and the d'Aulaires' other wonderful biographies that showed us history was about the fascinating stories of real people. Mr. and Mrs. d'Aulaire's wonderful ability to capture the every-day details of life, their impeccable research, engaging writing style, and gorgeous illustrations truly brought history to life. We know many of you love their books and thought we would share with you some information on this remarkable husband and wife team.

Edgar was born in Munich, Germany in 1898 to an Italian father and American mother. Edgar's father was a noted painter and his mother was a also an artist as well as a musician. Edgar began studying architecture but after only one year enrolled in the Munich School of Arts and Crafts. During his education Edgar studied under Henri Matisse as well as Hans Hofman and traveled to Italy to study fresco. He exhibited in Paris, Berlin, and Oslo and seems to have been fairly successful. Ingri was born in Kongsburg, Norway in 1904 and it appears she pursued art from the beginning. She studied in Norway and Germany as well as France. The couple met in Munich and were married in 1925. They moved to Paris and lived a sort of Bohemian artist life and often talked about immigrating to the United States. Upon receiving a small settlement following a trolley crash Edgar made his way to New York where he worked and saved to bring Ingri over. The two lived in a cold, walk-up apartment in Brooklyn and set to work establishing themselves in the art world.

The director of the New York Public Library took a liking to their work and encouraged them to write children's books. This began a life-long collaboration that would result in some of the best children's books published during the 20th century. Initially they focussed on myths and fairy tales, publishing their first children's book, The Magic Rug, in 1931. That was followed by Ola. Eight years later they would have a son and name him Ola! It wasn't until 1936 that they began writing historical biographies, the first being their well-loved George Washington. Soon their books became well known for the sumptuous illustrations. The process of recreating their drawings in all their lovely detail and folksy personality involved a painstaking and labor-intensive process known as stone lithography. Each illustration was carved four times on to Bavarian limestone slabs. The purpose for carving four times, was each slab was used for a different primary color. The slabs were then inked and the illustrations were printed using the slabs. The advantage of using this method was it preserved the remarkable hand-drawn quality the d'Aulaires were known for.

What many people do not know is that along with being talented artists, the d'Aulaires were also talented researchers and historians. Fluent in a combined five languages, the couple poured themselves into the research for each book. From traveling Italy, Portugal, and Spain while researching Columbus, to camping in the wild spaces of Kentucky and Illinois while studying Abraham Lincoln, and combing through national archives while writing George Washington, the d'Aulaires spared no effort.


In 1939 the d'Aulaires published Abraham Lincoln and were awarded the Caldecott medal for their work. They continued to work together producing 27 works, many of which have been reprinted in the past ten years. We are so honored to have been able to reprint seven of their biographies. You can check them out on our website.

We would love to hear what you think! Chime in below in the comments section and share your thoughts. Don't forget to check out our Facebook and Pinterest pages. To learn more about Beautiful Feet Books, click here.

And if you've enjoyed this, please feel free to share using the buttons below!
Email ThisBlogThis!Share to TwitterShare to FacebookShare to Pinterest
Posted by Rebecca Manor at 2:34 PM 1 comment: