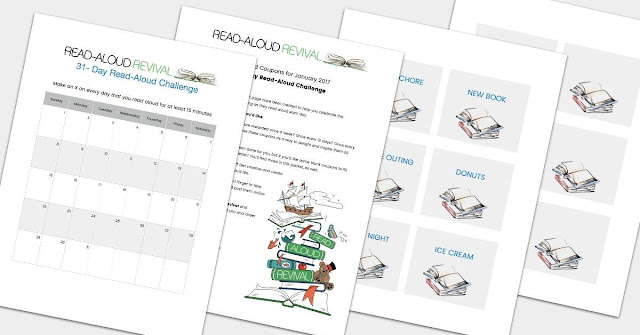 Read Aloud Revival is hosting another New Year Read Aloud Challenge and it looks and sounds fantastic. In fact, I'm going to sign up my three-year old. That's right. It's open to children ages 1-17 and its about them reading aloud, not you!

Check out all the details here!

We love everything Sara does to encourage families to spend time reading together and this is not a sponsored link. It's just something we at BFB think is pretty awesome and wanted to be sure all of you knew about it!


And if you've enjoyed this, please feel free to share using the buttons below.
Email ThisBlogThis!Share to TwitterShare to FacebookShare to Pinterest
Posted by Rebecca Manor at 10:01 AM No comments:

Have a glorious and sacred Christmas 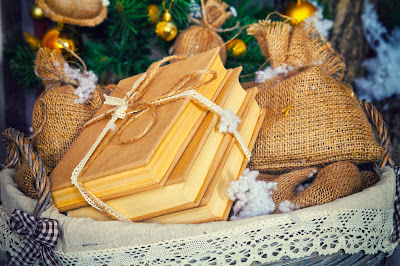 As we at BFB gather with our families and prepare to celebrate the birth of our Savior, we are thinking of all of you, our wonderful friends who have made this a wonderful year for us. We've loved connecting with you at conventions, on the phone, over at Instagram and Facebook. You are each appreciated and valued. Thank you for being the best customers in the world! You inspire us to continue in our mission and we love seeing your homeschool and educational experiences enriched by great literature.

We would love to share this Christmas meditation by our Rea Berg here.

The Vulnerability of a Virgin

“Behold a virgin shall conceive and bear a son, and shall call his name Emmanuel, God with us.”  Isaiah 7:14, Matthew 1:23

The Visitation by Henry Ossawa Tanner
This is the season of Advent.  “Advent” comes from the Latin–ad venire–meaning “to come to” and denotes a sense of anticipation or heralding the arrival of something.
For Mary, the arrival meant an unplanned pregnancy, the potential loss of everything–her home, her family, and possibly her life.
To be “found with child” before marriage (and during a betrothal) was a complete disaster in Ancient Hebrew culture. It was a tragedy with dire consequences.  Deuteronomy. 22:20 says, that if a man marries a maiden who claimed to be a virgin, and then finds out that she is not, “they shall bring the girl to the entrance of her father’s house and there the townsmen shall stone her to death.”
And Deuteronomy. 22:23 says, “If a man has relations within the walls of a city with a maiden who is betrothed, you shall bring them both out to the gate of the city and there stone them to death.  But if they were in the open fields, “the man alone shall die,” [because] the betrothed maiden may have cried out for help but there was no one to come to her aid.”
Mary’s unplanned pregnancy made her extraordinarily vulnerable. Vulnerable denotes being susceptible to being wounded or hurt–and what could possibly be more vulnerable than a young maiden with child?  Mary was susceptible to being wounded by her family, her community, her betrothed.
Vulnerable also means being open to moral attack, criticism, or temptation.
“Look! A young woman, a virgin, shall conceive and bear a son!” Yeah, right. Mary was vulnerable to contempt, scorn, to malicious mocking, to pure logic, to reason, to laughable disbelief, to the wagging of heads, the rolling eyes, the knowing smirks.
C.S. Lewis says of vulnerability:

To love at all is to be vulnerable.  Love anything and your heart will be wrung and possibly broken.  If you want to make sure of keeping it intact, you must give it to no one, not even an animal.  Wrap it carefully with hobbies and little luxuries; avoid all entanglements.  Lock it up safe in the casket or coffin of your selfishness.  But in that casket, safe, dark, motionless, airless, it will change.  It will not be broken; it will become unbreakable, impenetrable, irredeemable. To love is to be vulnerable.

Mary allowed herself to become vulnerable–to bear the potential shame, rejection, misunderstanding, disbelief, scorn and contempt that came as an unexpected outcome of her love and obedience to God.
The opposite of vulnerability is to be unbreakable, impenetrable, defensive, oppositional, intractable, insensitive, incapable of empathy or compassion.
Unwittingly, Mary carried within herself the King of Vulnerability.  When the King of kings, the Lord of lords, the everlasting Father, the Prince of peace, took on human form–and not only human form, but the most vulnerable–a tiny helpless babe, he demonstrated the power of becoming powerless, the majesty of laying aside all majesty, the honor of becoming the lowliest.  When the King of all eternity, the maker and sustainer of life, the genesis of all beauty, goodness, truth and light, came into the world he came stripped of everything but vulnerability.
Imagine the scene: the Eternal God has left the beauty, glory, and splendor of heaven–where “eye has not seen, nor ear heard, neither has it entered into the heart of man”–the wonders there, to be born of blood and water in a stable, dark, dank, cold, spread with urine-soaked hay, surrounded by the warm breath of animals, and their dung, and then wrapped in swaddling clothes and laid in a manger.
Matthew Henry says of the “swaddling clothes” that they signify

“rent or torn . . . his very swaddles were ragged and torn.  His being born in a stable and laid in a manger [reflects] the poverty of his parents–had they been rich, room would have been made for them in the inn–being poor they must shift as they could. [The precious lamb of God] was born into an age of the corruption and degeneracy of manners–that a woman of virtue and honor should be used so barbarously  . . . if there had been any common humanity among them, they would not have turned a woman in travail [labor] into a stable.”

In this scene we see the vulnerability of Mary and the vulnerability of this precious infant.
Five-hundred years before Christ, the playwright Aeschylus wrestled with the fate of the perfectly just man–the man who loves justice for the beauty of the thing itself, and not because being just brings worldly blessings.  Plato recorded the thoughts of Aeschylus:

The King of glory chose the way of vulnerability fully, completely, and without reservation  Having perfect foreknowledge he knew what to expect from broken humanity.
We are called to follow the vulnerable One.  We are called to follow Him, who “made himself of no reputation.”  Becoming vulnerable is painful.  We open ourselves to an unknown future, one we don’t have foreknowledge of.
Bryan Stevenson in his book, Just Mercy says the following:

Paul Farmer, the renowned physician, who has spent his life trying to cure the world’s sickest and poorest people, one quoted me something that the writer Thomas Merton said: We are bodies of broken bones.  I guess I’d always known but never fully considered that being broken is what makes us human.  We all have our reasons.  Sometimes we’re fractured by the choices we make; sometimes we’re shattered by things we would never have chosen. But our brokenness is also the source of our

common humanity, the basis for our shared search for comfort, meaning, healing.  Our shared vulnerability and imperfection nurtures and sustains our capacity for compassion.  We have a choice.  We can embrace our humanness, which means embracing our broken natures and the compassion that remains our best hope for healing.  Or we can deny our brokenness, forswear compassion, and as a result, deny our own humanity” (288-289).

I want the compassion and empathy spoken of here, to be a reality in my life.  I know my love for those I ought to love best is often conditional, harsh, strained.  I am so often selfish, prideful, quick to anger, and quick to judge. This is the confession of my own brokenness that in reaching for the light, I might find hope for the darkness in myself.
“Behold a virgin shall conceive and bear a son and shall call his name Emmanuel–God with us.” Our God made himself vulnerable in order to be the God that is with us. He does not stand afar, but stands with us in our sin, our pain, and our brokenness, to bring healing, light, and redemption.  That is the message of Christmas.
Email ThisBlogThis!Share to TwitterShare to FacebookShare to Pinterest
Posted by Rebecca Manor at 10:12 AM 2 comments: