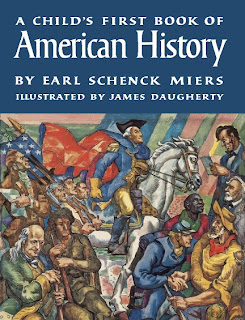 We are pleased to announce that A Child's First Book of American History is at the printers! We know many of you have been waiting for a long time and after a year-long process, it's going to be arriving soon. When we first undertook the project of bringing this book back into print we had no idea what we were getting ourselves into! Rea has been working on this book for over a year, tweaking color adjustments, redoing the entire text layout, and dozen other things.

And now for a sneak peak into this beautiful book. Click on any picture to enlarge. 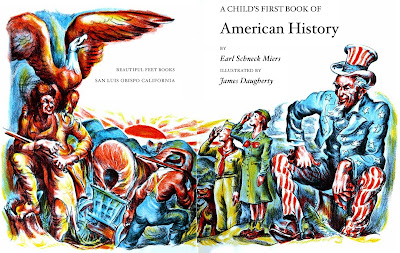 This is America! and this is its glowing, epic story, from the days of the Viking expeditions to the birth of the Atomic Age. Here are the explorers, the Indians, the settlers and fur trappers, the soldiers, the statesmen, the men and women who have shaped our country and its destiny. It is a continuous tale of adventure, of wars, of industry and invention, of hardship and growth; it is an unparalleled tale of courage, high ideas, hard work–and a precious thing called Freedom. 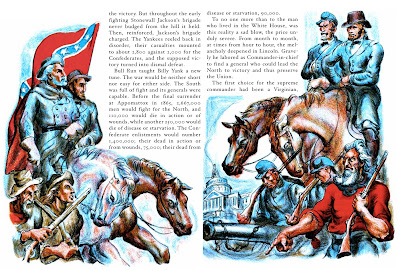 Perhaps more happened, faster, in the history of this country than in any other. Earl Schenck Miers tells its story as it should be told: in terms of the great moments and events, and through the lives and experiences of individuals. 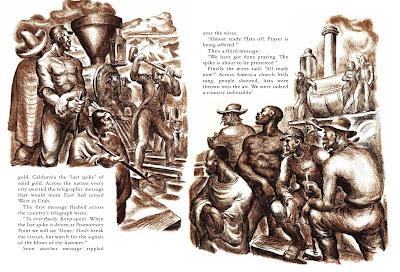 Among the fifty chapters: the faith and longing for freedom of worship that brought the band of Pilgrims to Plymouth's shores, James Smith's own account of his capture by the Indians in 1755, excerpts from Davy Crockett's diary telling of the last days of the Alamo, a young Southern girl's description of the burning of Columbia, South Carolina in the Civil War, the story of the transcontinental railroad, and much much more. Miers has unforgettably recreated the hardships of a cattle drive, the the inspiring story of Booker T. Washington's fight to overcome great obstacles, the suspense that held America under its spell in 1927 when a young man named Lindbergh flew to Paris all by himself. 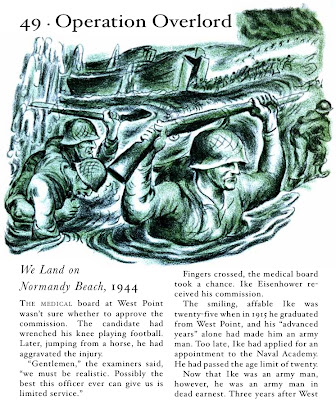 This telling of the American story is dramatic, ever engrossing–and it is based on careful scholarship. The more than 200 illustrations by James Daugherty–most of them in color–are an integral part of the book. A great artist and a superb scholar-storyteller have joined forces to produce a memorable record–an instructive, immensely readable and heart-warming book about the country we love.

Earl Schenck Miers was an American historian (1910-1972), who wrote over 100 books, mostly about the Civil War. In the words of another notable historian–Paul Angle, Miers was one "who stressed the essential drama of events and brought the human beings of the past back to life." Despite struggling with cerebral palsy from birth, which made even holding a pen or pencil nearly impossible, Miers began writing as a youth, by carrying a typewriter to school each day. He attended Rutgers University where he studied journalism and founded the Rutgers University Press. Some of his more popular children's works include the We Were There series published by Grosset & Dunlap.

James Daugherty, an illustrator and author (1889-1974), was passionate about the American story and believed it ought to be told through vigorous illustration and spirited text.He is best known for his folksy all-American retelling of the fable of Androcles, in Andy and the Lion, which earned the author/illustrator the Caldecott Honor Medal in 1938. In Carl Sandburg's Abe Lincoln Grows Up, a perfect marriage blended Sandburg's lyrical prose with Daugherty's tender yet powerful sketches of Abe as he grows from a boy to a young man. In The Magna Charta, Daugherty tells the often humorous, yet inspiring story of one of Western civilization's most significant milestones in the progress of civil liberty–the signing of the Magna Charta by King John at Runnymede in 1215. Of Courage Undaunted brings Daugherty's manly illustrations to full flower in the adventure of Lewis and Clark's remarkable exploration of the Louisiana Purchase. Poor Richard captures the essential nature of Benjamin Franklin with energetic and dramatic three-color lithographs that reveal the witty and ever-genial printer, inventor, statesman, diplomat, and brilliant Founder. Beautiful Feet Books is honored to be providing a number of Daugherty's works to a new generation of young Americans.


If you've enjoyed this, please share it! You can do so using the buttons below. And don't forget to check out our Facebook and Pinterest pages.
Email ThisBlogThis!Share to TwitterShare to FacebookShare to Pinterest
Posted by Rebecca Manor at 11:16 AM