Introducing Youngsters to the Ancient Classics

Shakespeare, Chaucer, Homer, Virgil. All these names make the hearts of English majors like me beat a bit faster. I love reading the greats but when it comes to introducing these masters to children, my heart beats a bit faster with anxiety. Introducing classic literature to children is a bit of a balancing act. On one hand you want to challenge your children but how do you do this without overwhelming them with stories that are complex, intricate, and dense? Can you encourage a child to fall in love with advanced stories without overwhelming them with too much detail? That problem is one of the challenges of using a literature approach to teaching. But, the good news is that there are extremely talented authors who have brilliantly adapted some of the most famous stories from these authors and made them approachable for young children. While some may decry the use of adaptations, I have found that they are wonderful tools in that these simplified versions allow you to introduce classic works to students at a young age. This creates a curiosity about the original and prepares them to read the original works. It breeds a familiarity with plot and character that enables them to delve into the complexities of the original works when they reach an appropriate age. So, today, I want to share with you some of my favorite adaptations of the classics. 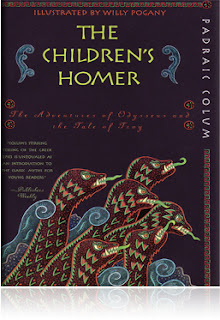 The Children's Homer by Padraic Colum
Taking the works of that great original storyteller, Homer, Padraic Colum has adapted the stories of Iliad and the Odyssey into an accessible format while maintaining the lyrical integrity of the original text. The drama of Odysseus epic journey, the intrigue of the cunning gods and goddesses of Greek mythology, the clanging battles, it all come alive in this excellent adaptation. The book also benefits from lovely line sketches by Willy Pogany, as seen below.

Geared for students in 5-8th grade, this will provide an exceptional introduction to the greatest classic epic! 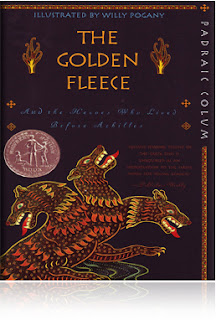 The Golden Fleece and the Heroes Who Lived Before Achilles by Padraic Colum
Another Padraic Colum classic, also illustrated by Willy Pogany, this adaptation relates the adventures of Greek hero Jason. Padraic takes on this classic of Greek mythology and relates all the wonder and strangeness of this storied world. The tales offer an introduction to the pantheon of Greek mythical figures from Hercules to Orpheus to Theseus. Aimed at readers in 5th-8th grade. 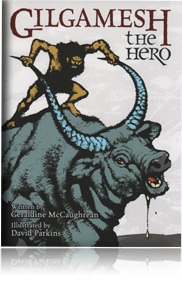 Gilgamesh the Hero adapted by Geraldine McCaughrean
Taking the oldest recorded story in the world, Geraldine McCaughrean's version is a free adaptation from a variety of translations and it preserves the intrigue and adventure that make this work so well-loved. The work was originally carved on twelve stone tablets which, over thousands of years, were smashed into thousands of shards. Even now, for all the painstaking work of restoration, different scholars place the events of the story in different orders, and some episodes are still lost. Gilgamesh is thought to have been a real king reigning sometime between 3200BC and 2700BC over the Sumerian city of Uruk, in Mesopotamia (now Iraq). He led expeditions into neighboring territories, to fetch back timber for his grand building projects. The story of the Flood - several floods devastated the region - found its way into other cultures, ultimately into the Bible, undergoing changes according to the religion of the teller. The work of archaeology is incomplete; some of the tile fragments still baffle interpreters. This edition makes the work accessible to readers over the age of 10 years and if you would like further information on interpretation, check out our study guide for teaching the work using a Charlotte Mason approach. 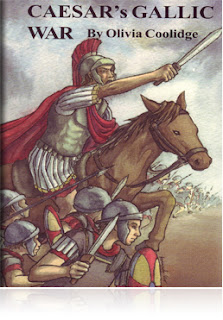 Caesar's Gallic Wars by Olivia Coolidge
The original war diaries of Julius Caesar are a historian's treasure trove. They contain details of war, everyday life, Roman social order, and much more. But, for a young reader they can be quite dense so Olivia Coolidge's brilliant version brings the richness of detail to life for intermediate readers. Using the original diaries as her guide, she writes her version from the perspective of a young soldier serving Caesar in his quest for European domination. While much easier to read than the original, this is best for readers over the age of 10 or 11. 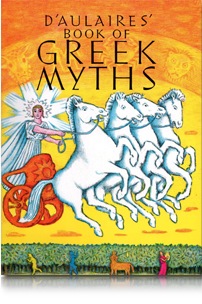 D'Aulaires' Book of Greek Myths
This has become a classic in its own right and I cannot think of a better way to introduce the complex world of Greek mythology to middle schoolers. Vibrantly illustrated, I remember spending hours pouring over these strange, intriguing, and fascinating stories. Greek mythology is a complex science and this book provides access into the imaginative world, provides a window into the beliefs of the ancient Greeks, and is just plain entertaining.

I hope this provides a useful guide to some of the best adaptations of ancient classics. In the near future I will write a post on my favorite children's versions of more recent texts such as Chaucer's Canterbury Tales and Shakespeare's tragic plays.

Email ThisBlogThis!Share to TwitterShare to FacebookShare to Pinterest
Posted by Rebecca Manor at 9:43 AM