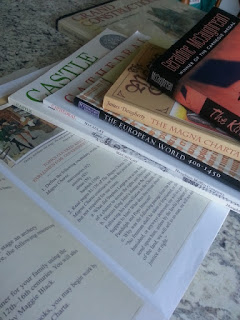 Today Audria continues to share with us her family's adventure through Medieval history using our program for advanced intermediate and junior high level students. Even in the midst of sickness and an out-of-state move, Audria's lovely family had rich discussions on justice and injustice, heroes, law, order, and much more! Such a dynamic time period to study. Here's Audria:

We would love to hear what you think! Chime in below in the comments section and share your thoughts. Don't forget to check out our Facebook and Pinterest pages.  To learn more about Beautiful Feet Books, click here.
And if you've enjoyed this, please feel free to share using the buttons below!
Email ThisBlogThis!Share to TwitterShare to FacebookShare to Pinterest
Posted by Rebecca Manor at 1:16 PM