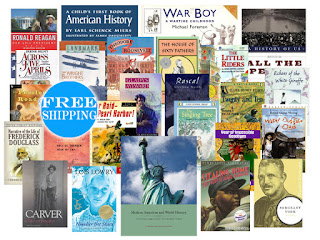 Melissa is back with an update on their school year. She's working through our Modern American and World History for Intermediate grades. You can read parts I and II of her series. Within the post below, you can click on links to some of the literature she's been reading with her children for more detailed reviews! So helpful when planning out your study. Melissa has taken the flexibility built in to our studies and really made this work for her family. They're stretching it out, switching out titles where necessary and adapting lessons and we love to see this! This is one of the things we work hard at when we're writing out guides: making them structured enough to give guidance but flexible enough to allow for customization!


After finishing our first term of the 2015-2016 school year, I thought I'd give an update on the Beautiful Feet Modern American and World History study we're using. Part way through the term, I gave an introduction/overview of the program. Since, we finished up the term on lesson twenty-seven. I originally scheduled history three days per week, hoping to finish the term with lesson thirty-six. However, the assigned readings are very long so I had to split some of the lessons over two days. At this point, it looks as though the study may take more than one school year to complete unless we add history a fourth day per week.

So far, the books have been wonderful! We've read five books in their entirety, including: Across Five Aprils by Irene Hunt, The Perilous Road by William O. Steele, a Frederick Douglass substitution, Carver: A Life in Poems by Marilyn Nelson, and Theodore Roosevelt by Genevieve Foster. We've also read assigned chapters of A Child's First Book of American History by Earl Schenck Miers.

As noted, I did substitute one book. The BF study uses Narrative in the Life of Frederick Douglass by Frederick Douglass. However, after reading aloud the Preface and a Letter, I could see the kids were not ready for it. After a bit of research, I opted to substitute Frederick Douglass Fights for Freedom by Margaret Davidson. I think Douglass' original Narrative... is fabulous, but I felt it was more suited for upper middle school or high school. The kids will definitely be reading it at some point down the road. For now, Davidson's book was a good fit! 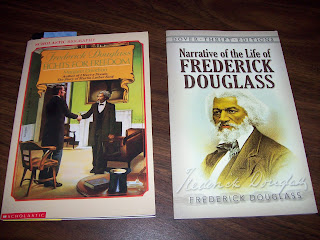 Here is a narration Riley wrote after we read Frederick Douglass Fights for Freedom...

Frederick Bailey was born in February 1818, no one knows the exact date, he was a slave. Frederick wanted to be free. He decided to run away to the north. Frederick disguised himself as a sailor and got aboard a train. He rode the train to New York. He found a safe house there. While in New York, Frederick got married. He and his new wife moved to Massachusetts. Frederick changed his last name to Douglass to be safe from slave catchers. He was an abolitionist. He fought for freedom for the millions of slaves that were not free yet. He and his wife Anna, and their five children, ran a safe house on the Underground Railroad. Frederick gave many speeches against slave owners and even talked to President Lincoln. He died February 20, 1895. He was seventy-seven years old. The kids are not loving A Child's First Book of American History. However, I think it does a great job of filling in the gaps. It's sort of a spine book and Daugherty's illustration are a treat. Across Five Aprils is still my favorite with Foster's Theodore Roosevelt falling second. We learned a great deal about Roosevelt from this Initial Biography. I highly recommend it and am thrilled to see Beautiful Feet bring it back in print!


Overall, the study is going well. History is still the kids favorite subject. Below are a few more samples of their notebook pages.... 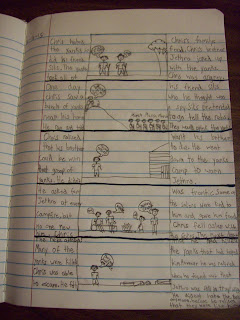 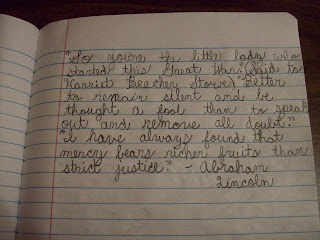 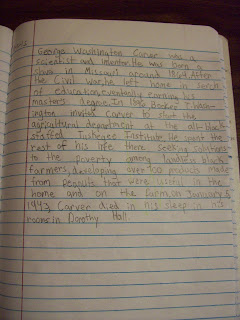 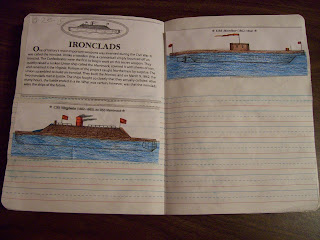 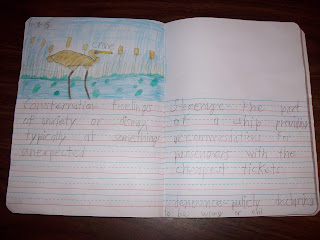 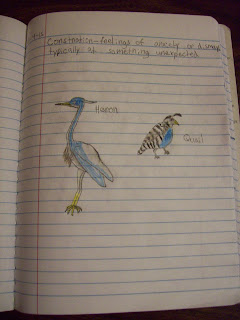 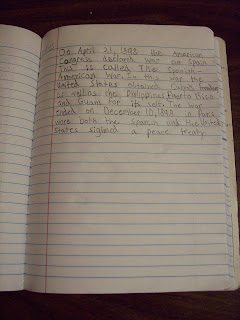 Thank you Melissa! Check out her blog, Reflections from Drywood Creek for great information on the Charlotte Mason method, book reviews, and much more!

Our new 2015-2016 catalog is now available! If you want to view it right now it's available online here. And if you would like to request a hardcopy, click here.
We would love to hear what you think! Chime in below in the comments section and share your thoughts. Don't forget to check out our Facebook and Pinterest pages.  To learn more about Beautiful Feet Books, click here.
And if you've enjoyed this, please feel free to share using the buttons below!
Email ThisBlogThis!Share to TwitterShare to FacebookShare to Pinterest
Posted by Rebecca Manor at 8:00 AM