An Education in Classics 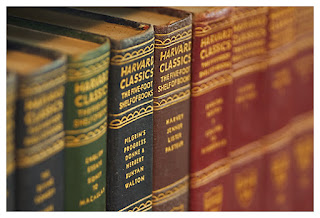 Are you all familiar with the Harvard Classics? It's also known as "Dr. Eliot's Five Foot Shelf" and is the result of several speeches given by the aforementioned Dr. Eliot, the president of Harvard University from 1869-1909. Apparently Dr. Eliot had stated in several speeches that it was possible to obtain an education in the elements of classics by reading for fifteen minutes each day from a collection of books that would fit on a five foot shelf. How clever is that?

A publishing company took notice and soon Dr. Eliot was working on compiling that five foot bookshelf! The collection came to be known as The Harvard Classics and the originals are highly collectible. Thankfully for those of us who don't have $2500.00 to plunk down for one of the beautifully bound sets from 1910, many of these works are now available as inexpensive paperbacks, free downloads, and of course, you can always check them out from the library.

At BFB we love the classics and take the opportunity to incorporate them into our history curriculums. Beowulf takes its place in our Medieval History Through Literature, along with The Song of Roland, Canterbury Tales and many other great works of the medieval times. Students using our Ancient History Through Literature are introduced to the writings of Homer and the ideas of Aristotle. The classics, those books that have stood the test of time, are essential parts of a well-rounded education.

For those of you who are curious as to what makes up this five foot book shelf, here's the list of works. I would love to reach a point in my literary pursuits when I will have read each and every piece. Maybe taking that 15 minute per day challenge is something I should consider? Have you read any of these works? All of them? Would you be interested in spending 15 minutes each day in pursuit of a liberal arts education? Since this collection was assembled at the beginning of the 20th century many books considered "modern classics" are missing. Many of the selections also represent a world view firmly steeped in western culture and a growing faith in the ability of science to explain all. What do you think of this? Would you add books to provide more balance? What books would you add?

Email ThisBlogThis!Share to TwitterShare to FacebookShare to Pinterest
Posted by Rebecca Manor at 11:02 AM