Kathy reflects on To Kill A Mockingbird 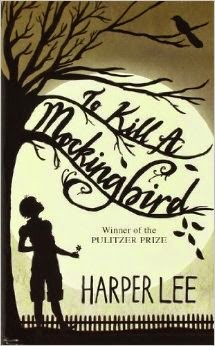 “Maycomb was a tired old town, even in 1932 when I first knew it. Somehow, it was hotter then. Men's stiff collars wilted by nine in the morning. Ladies bathed before noon and after their three o'clock naps. And by nightfall were like soft teacakes with frosting from sweating and sweet talcum. The day was twenty-four hours long, but it seemed longer. There's no hurry, for there's nowhere to go and nothing to buy...and no money to buy it with.” (1)

Every time I read this paragraph from Harper Lee’s Pulitzer Prize winning novel, To Kill a Mockingbird I have to smile. Like Scout, I too grew up in a small southern town. The community was an eclectic mixture of people. We had our own general store, where on any given day of the week, the gentlemen of the community would sit around to talk, read the newspapers, listen to the radio and play checkers. Every home had a party line telephone, from which the town gossip gathered her information for her local newspaper column. Children ran freely in the backyards and took turns playing games of “statues”, “freeze tag,” and when the temperatures climbed in the 90’s, they would play on the latest toy, the “Whammo Slip ‘n Slide. I remember going on “visits to the elderly” as I called them each day. I not only went for the social aspect, but each of the elderly was very generous with their supply of candy and soda pop. I do remember our community being tight knit, where everyone treated their neighbor as they wanted to be treated and looked out for each other.

When I was about six years old, my parents and I were watching the weekly Saturday night movie on the local public television station and the featured movie was To Kill a Mockingbird. This was my first introduction to Harper Lee’s classic and it made a huge impression on my formative years. Immediately, I connected with Scout. Like Scout, I was a tomboy. I could have cared less if my hair was combed and I would rather have been dressed in a shirt, shorts or pants than have to wear a scratchy, fancy dress to school. I too had learned to read before I went to school and had a passion for reading the written word. My poor kindergarten teacher had no idea what to do with me after she discovered I could read. In typical tomboy fashion, I entered into the playground scuffles despite my obligatory dress. I remember having to learn life’s lessons the hard way. I remember my parents quoting a line of Atticus’s to me quite frequently, “"You never really understand a person until you consider things from his point of view - until you climb into his skin and walk around in it." (2) My family was not a rich one, but like Scout, my parents gave me what I needed.

As an adult, I now identify with Atticus, Scout’s father. I believe that all parents deep down wish to live out a life of integrity before their child. As the old saying goes, “More is caught than taught.” From Atticus I have learned to follow my conscience and not let others sway my beliefs and convictions. I have learned that you need to look beyond an individual’s skin color or physical appearance to see the person they are deep down inside. Each and every person on this planet is a “child of God, created in His image.” When another person is wronged or mistreated you need to stand up for that individual no matter what the cost to you personally. If you or your family has become the subject of gossip, remember to hold your head high and conduct yourself in a moral, upright manner. Family is a gift from God and you need to love your family unconditionally without strings attached, to be there for them through the good times and bad.

On July 8, 2014 Scout, Jem, Atticus, and Boo Radley will be entering the digital age. Harper Lee,
author of the 1961 Pulitzer Prize novel had this to say about her timeless classic, “I'm still old-fashioned. I love dusty old books and libraries. I am amazed and humbled that Mockingbird has survived this long. This is Mockingbird for a new generation." (3)


I heartily agree with Miss Lee’s comments. Of all of the books I have read To Kill a Mockingbird has been the most influential piece of literature in my life as a child, and now as an adult. My heartfelt wish is that this perennial classic will continue to thrive and endure for the enjoyment of generations to come.

1. To Kill a Mockingbird by Harper Lee; J. B. Lippincott & Co.; 1960
2. Ibid.
3. "To Kill a Mockingbird Finally Going Digital"; The Associated Press; USA Today; April 28, 2014
Email ThisBlogThis!Share to TwitterShare to FacebookShare to Pinterest
Posted by Rebecca Manor at 8:30 AM