Today in the U.S. people are recognizing those who have sacrificed their lives in the armed services. The history of this day, originally known as Decoration Day, stretches back to 1868 when General John Logan proclaimed a day set aside to place flowers on the graves of Civil War soldiers in Arlington Cemetery. Following the Civil War, American soldiers have lost their lives in the Spanish-American War, World Wars I and II, the Korean War, the Vietnam War, the Persian Gulf War, The Iraq War, and the Afghanistan War.

Last November I had the opportunity to visit Normandy and walk on the Utah and Omaha beaches. We visited Point du Hoc and other key sites of the D-Day invasions. Our tour guide told us harrowing stories that gave full voice to the horrors of war, as well as heroic acts of courage.

The final stop on the tour was the American Cemetery. We watched the flag being lowered against a cloudy sky. We walked through thousands of white crosses in straight lines, dotted here and there by Stars of David. It was moving and heartbreaking. War comes at such a high cost. 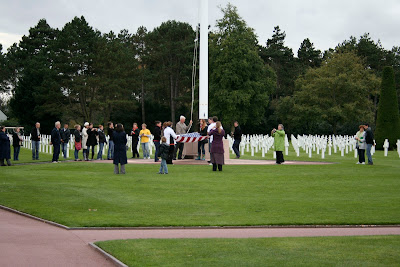 At 3PM local time across the US, it is customary to observe a moment of silence in recognition of those who have fallen. I think it is important to do this. Unfortunately, it seems that Memorial Day weekend is more about shopping the sales, having a cookout, or crossing items off of the endless to-do list. There is nothing wrong with these activities but it is essential to stop and take a moment to recognize the very high cost paid for our freedoms. 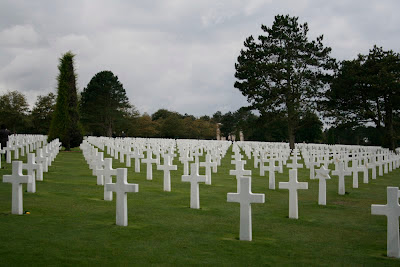 In France, where I live, it is also a holiday, albeit a religious one. The Monday after Pentecost Sunday is a national holiday. This year the American holiday and the French holiday coincide and I find that striking. It's a fitting reminder that our hope is not in the powers of this earth, but in the Prince of Peace.
Email ThisBlogThis!Share to TwitterShare to FacebookShare to Pinterest
Posted by Rebecca Manor at 6:18 AM