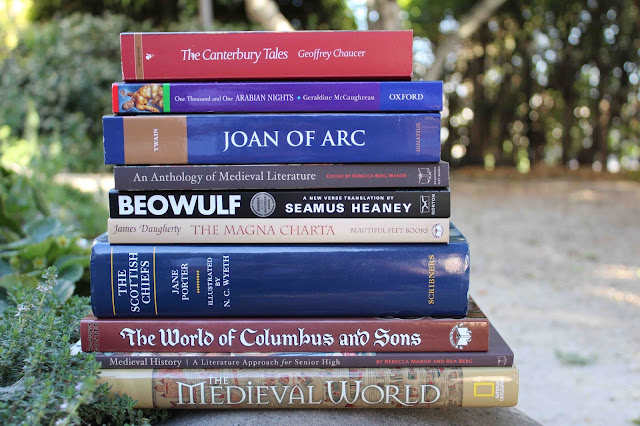 This study is a journey through some of the best original source material available and is sure to spark your student's curiosity and imagination. Although many people have been taught that the period from 300 to 1522 A.D. was marked by darkness, ignorance, and struggle, this guide will show you that the opposite is true! Rich period literature will show you that it was a time when people were forming ideas that still impact us today. It was also a time of exciting discoveries, new innovations, and wonderful stories. Reading Beowulf will open student's eyes to the terrors of living under the threat of Viking raids. The Song of Roland provides a glimpse into the mores and ethics of a time where the concepts of chivalry were just developing. The story of William Wallace reveals a passionate love of liberty that we still find heroic today. You will also accompany Marco Polo on his travels through Asia, witnessing sights never imagined by the western mind. Songs, hymns, and creeds will give you insight into the religious beliefs of people who lived over 1500 years ago! In this course students will learn about King John, King Arthur, Saladin, Queen Eleanor, Joan of Arc, Shahrazad, Marco Polo, Peter Abelard, Geoffrey Chaucer and many others. They will learn about Martin Luther who revealed a new way to approach God and about John Wycliffe who organized the Bible. Students will read about the life of Columbus, whose discovery of North America changed the world forever. By reading some of the best literature on the subject, students will be encouraged to discuss new ideas and social changes. Links to websites, hands-on activities, discussion questions, mapping activities and much more will bring the Middle Ages to life. Set up in 35 weekly lessons, this study guide provides everything you need to complete an exciting literature based history course.

Here's a listing of the literature used in this course, including our new Medieval Anthology, produced specifically to go with this study. All items are available in our discounted Medieval History Senior High Pack. 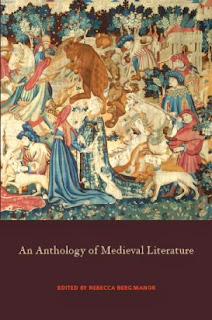 An Anthology of Medieval Literature - edited by Rebecca Berg Manor
Beautiful Feet Books and Rebecca Manor's Anthology of Medieval Literature traces the development of thought and culture in Europe from the fourth century up through the 1300s. Beginning with excerpts of Augustine's Confessions and culminating with selections from Dante's Divine Comedy, students will trade medieval culture from the beginnings of Christendom to the Age of Exploration. Selections from major works such as The Song of Roland, Marco Polo's Book of Wonders, and The Deeds of Charlemagne are included along with poems, creeds, hymns, and selections from medieval thinkers like Peter Abelard and Thomas Aquinas. For use with the Beautiful Feet Books' Literature Approach to Medieval History study guide, this anthology will provide high school level students with an introductory survey of some of the greatest literature works of western civilization. 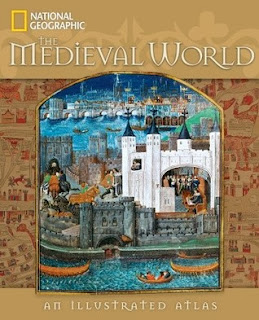 The Medieval World: An Illustrated Atlas - edited by John M. Thompson
Sumptuously illustrating the vivid parade of a thousand years of history, this comprehensive historical atlas concentrates on the Mediterranean world but also shows what happened across the globe between A.D. 400 and 1500 —from the fall of Rome to the age of discovery. Every page glistens with period works of art, fascinating maps, quotes from medieval figures, close-ups of intriguing artifacts, and rich landscape photographs of the places where battles were fought and monarchs were crowned. For every century, a signature city is spotlighted to represent that era's developments. Time lines connect the many dramatic events that took place in these dark and exciting times, which continue to shape our world today. Written by a team of veteran National Geographic writers, this richly illustrated reference includes full index, reading list, and glossary. 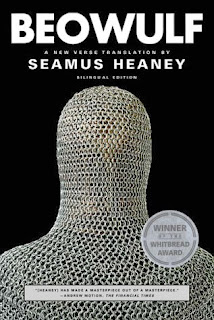 Beowulf: A New Verse Translation - by Seamus Heaney
In 5th century Denmark, a murderous monster stalks the night, and only the great prince of the Geats has the strength and courage to defeat him. The story of Beowulf's terrifying quest to destroy the foul fiend Grendel, his mother–a hideous sea-hag, and a monstrous fire-dragon, is the oldest surviving epic in English literature. Beautifully translated and updated by the brilliant linguist Seamus Heaney.
"A faithful rendering that is simultaneously an original and gripping poem in its own right." —New York Times Book Review 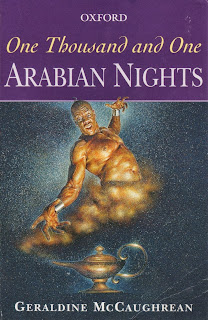 One Thousand and One Arabian Nights - Geraldine McCaughrean
A completely original version of the Arabian Nights by award-winning author Geraldine McCaughrean. In order to delay her inevitable execution, Queen Shahrazad tells her murdering husband, King Shahryar, a wonderfully exciting story every night. The brilliant storyteller preserves her life while relating tales of intrigue, adventure, and duplicity. A delightful window into the Persian world. 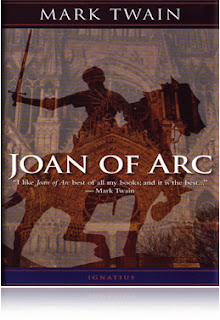 Joan of Arc - by Mark Twain
Very few people know that Mark Twain (Samuel Clemens) wrote a major work on Joan of Arc. Still fewer know that he considered it not only his most important but also his best work. He spent twelve years in research and many months in France doing archival work and then made several attempts until he felt he finally had the story he wanted to tell. He reached his conclusion about Joan's unique place in history only after studying in detail accounts written by both sides, the French and the English. Because of Mark Twain's antipathy to institutional religion, one might expect an anti-Catholic bias toward Joan or at least toward the bishops and theologians who condemned her. Instead one finds a remarkably accurate biography of the life and mission of Joan of Arc told by one of this country's greatest storytellers. The very fact that Mark Twain wrote this book and wrote it the way he did is a powerful testimony to the attractive power of the Catholic Church's saints. This is a book that really will inform and inspire. 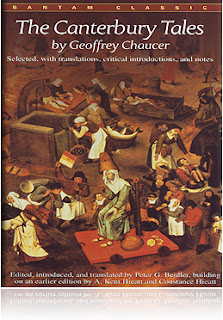 Canterbury Tales - by Geoffrey Chaucer
Lively, absorbing, often outrageously funny, Chaucer’s The Canterbury Tales is a work of genius, an undisputed classic that has held a special appeal for each generation of readers. The Tales gathers twenty-nine of literature’s most enduring (and endearing) characters in a vivid group portrait that captures the full spectrum of medieval society, from the exalted Knight to the humble Plowman. For advanced readers due to difficult language and mature content. 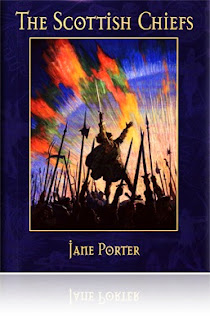 Scottish Chiefs - by Jane Porter
This magnificent book tells the story of the brave Scots who rebelled against the tyranny of King Edward during the period of 1296 - 1305. This inspiring tale of courage has been a favorite for generations of readers. The story of William Wallace, Robert the Bruce, and the brave Scots who stood up to English tyranny is sure to become a favorite! 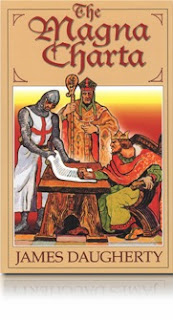 The Magna Charta - by James Daugherty
It was Ben Franklin who coined the phrase, "Rebellion to tyrants is obedience to God," and if any historical drama fulfills that maxim, it is surely the saga of King John and the drafting of the Magna Charta. Out of the rich turbulence of English history, June 15, 1215 stands apart as a significant milestone in the progress of human liberty. On that day, a brave band of barons, led by the noble Stephen Langton, and calling themselves the Army of God, stood up to the wicked King John and demanded that he restore the ancient laws of England that he had so unabashedly trampled underfoot. The era is a rollicking one filled with colorful characters like Robin Hood and his Merry Men, Richard the Lionheart, Queen Eleanor of Aquitaine, and many more. Newbery and Caldecott medal-winner James Daugherty brings his own passion for freedom's story to this wonderful saga of the thirteenth century. Daugherty devotes the last part of the book to a history of the "documents" of freedom—what he calls the "Children of the Magna Charta"—demonstrating how liberty has progressed over the ages. Two-color illustrations by the author enhance the drama of this text. 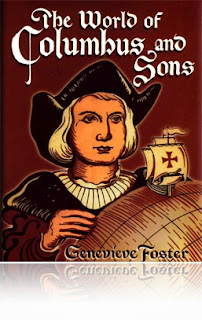 The World of Columbus and Sons - by Genevieve Foster
This is the story of a wonderful, changing, reawakening world—the world of the Renaissance and Reformation. Measured by the lifetime of Columbus and his sons, this book spans the years from 1451-1539. With Columbus as the central figure of this narrative, readers will also learn the fascinating stories of Prince Henry the Navigator, Ivan III of Russia, Gutenberg, Queen Isabella, Leonardo da Vinci, Mohammed II, the African ruler Nomi Mansa, Martin Luther, Erasmus, Albrecht Dürer, Copernicus, Michaelangelo and many others. Told in Foster's engaging and winsome style enhanced by her helpful chronologies and timelines, readers will learn of the religious, cultural and scientific changes that ushered in a new frontier of exploration and discovery.

Here's a note from the author: Rebecca Berg Manor:
This period in history is so exciting and it is my hope that this full-color guide will open up new worlds to you and your students! It is a high school level course and the guide is structured to allow for you to personalize it to each student. It is formatted in 35 weekly lessons with reading assignments, mapping activities, research and discussion topics, hands-on and craft suggestions, vocabulary lists and much more. Knowing that each student is different, I have tried to set it up to allow you to personalize the study to your student's unique needs. Each assignment has been carefully constructed to provide opportunities for each student to personalize the study. One thing that I try to emphasize in the guide is the fact that it is a guide and it's supposed to make your job easier, not harder! It's chock full of ideas and activities but they're not all required. The focus should be the literature, not checking off every single activity. The activities are there to enrich your study, so pick and choose according to the educational needs and interests of your students. Have fun with it!

Email ThisBlogThis!Share to TwitterShare to FacebookShare to Pinterest
Posted by Rebecca Manor at 1:44 PM