some of the books we read for weeks 7-12
By the title you can see that we haven’t covered a long period in history. We hit a little snag in our schedule…my husband was offered a wonderful job and we are in the process of moving. My homeschool schedule took a major hit! Normally, I would have carried on this section of our study on through to the Magna Charta, medieval architecture, and castle life. We should be finishing up week sixteen of the study instead we are in the midst of week twelve.
The study of Queen Eleanor and her times begins in week seven of the study. We chose to start this section with one of the recommended books A Proud Taste of Scarlet and Miniver  by E. L. Konigsburg. Oldest loved this book and even the younger children listened to the story. We couldn’t put the book down and I finished reading it aloud in about four sittings. Oldest became enthralled with Queen Eleanor. Everything about her and her times fascinated him. He checked out several extra books at the library on the time period and enjoyed a couple of books on Saint George the Dragon Slayer. After reading the next chapter in our spine book (The European World) we started on Queen Eleanor: Independent Spirit of the Medieval World.

Lego feudalism model
In his first couple of weeks with this section of the guide Oldest explored feudalism. He chose to make a Lego representation of the feudal system. He then explored several websites on Gothic architecture, Vikings, and the early Crusades. He also worked on his map marking cities and Queen Eleanor’s route on the Second Crusade. We read about the struggle between church and state through the tragic story of King Henry II and Thomas Becket. Oldest found Becket’s betrayal of his friend and king shocking and just could not understand the Church’s stance on a nation’s laws. Oldest still sees the world in very black and white terms. He was rather upset at the lack of true justice in medieval law. He struggled with the idea that people who called themselves Christians did not “walk the talk”. I had to remind him at this point that many people during this time in history could not read. Most people did not have access to a Bible and simply believed whatever they were told. We had some good discussions that we will likely revisit when we study the Protestant Reformation. I felt a little sad for my son…sensing his faith in humanity took a hit. A little gray is starting to penetrate his black and white world.

the crossbow worked
Oldest designed a tapestry with a battle scene from the Second Crusade. I then assigned him a five paragraph paper on Eleanor of Aquitaine. I simply hoped to get one page. He does not enjoy writing. He loved to write when he was younger but something happened during his public school years to choke that early spark from him. The past few months I have backed off from too many writing assignments and started slowly implementing techniques I’ve learned from Brave Writer. Once he started writing about Eleanor he couldn’t stop! I took a very hands off approach with this assignment. As he continued to write I allowed him to put off his other work. He wrote 1144 words! I was beyond thrilled and chose to accept his paper without a proper editing session. I didn’t want to end his enthusiasm for writing or history. He also wrote a poem about her that I will have to add a picture of later. It is currently boxed for the move (along with both of the Eleanor books).
We then started The Boy Knight: A Tale of the Crusades by G. A. Henty and Saladin: Noble Prince of Islam by Diane Stanley, Saladin: The Warrior Who Defended His People by Flora Geyer and Richard the Lion Heart and the Third Crusade: The English King confronts Saladin by David Hilliam. All of these books are only recommended and are not a required part of the guide. We enjoyed reading The Boy Knight and the rest of the books above helped to flesh out the history in the novel. Oldest made a mini crossbow and then spent some time tinkering with it to make the design better.The Boy Knight segued quite nicely into The Adventures of Robin Hood. We’ve watch a few Robin Hood movies over the years so he knows the basic story. Due to our crazy moving schedule we only got through three or four chapters a week. We had already chosen our projects and bought parts but will have to wait until after the move. We were going to make a PVC pipe long bow and Robin Hood style hats for everyone and host an archery competition followed up with a proper medieval feast. We’ll actually do those projects at the end of our study.
We did watch the Doctor Who episode: Robots of Sherwood. Oldest enjoyed pointing out scenes that were inspired from the book. He thought the actor and writers did a good job of bringing Robin Hood to life…other than the robots and time traveling of course. We discussed heroes in literature, forest law and justice. I was surprised when he pointed out the similarities in literary style between Doctor Who, King Arthur, 1001 Arabian Knights, and Robin Hood! They are all framed narratives. Just as each chapter of the books is part of an overall narrative telling a single story so is an entire season (sometimes several) of Doctor Who. I was impressed he caught that. I also never considered using literary devices to describe visual media. We also read a few article on the Battle of Hastings and the Norman invasion of England. Learning about the conquest helped us to understand the animosity between the Saxons and the Normans in The Boy Knight.

fig tarts
Oldest did have to write a food review for another course and chose to make medieval fig tarts. He finds a way to merge most assignments into his medieval studies these days. The tarts were tasty but really heavy on the spices. I had to make a slight modification to the recipe above since fresh figs are hard to come by in Kentucky! I found dry whole figs at the local Mennonite shop and soaked them in grape juice overnight. I also skipped the saffron and used turmeric…
We are looking forward to getting settled in our new home so we can continue our medieval history studies. We are about to start the story of the Magna Charta and the origins of representative government. For now, Oldest is learning to play one of the ballads in The Song of Robin Hood by Anne Malcolmson, Grace Castagnetta and Virginia Burton. The book is a must have for any true fan of Robin Hood. The book contains early original ballads of Robin Hood with music adapted for modern times. Once he is comfortable I’ll record his version and upload it to YouTube and post a link here. Also, last month one of my favorite blogs: As He Leads Is Joy posted a picture of Little John’s grave she found while out on a walk. Just something of a neat coincidence…
Thank you so much Audria for sharing this with us! Be sure to check out Audria's blog, At The Well where this post originally appeared. 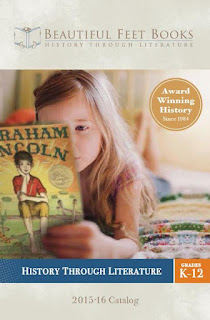 We would love to hear what you think! Chime in below in the comments section and share your thoughts. Don't forget to check out our Facebook and Pinterest pages.  To learn more about Beautiful Feet Books, click here.
And if you've enjoyed this, please feel free to share using the buttons below!
Email ThisBlogThis!Share to TwitterShare to FacebookShare to Pinterest
Posted by Rebecca Manor at 1:21 PM