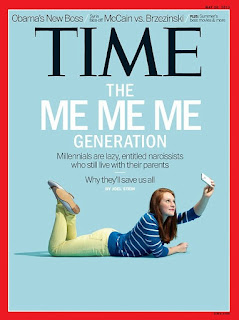 This week's Time magazine cover article features the "Me Me Me Generation", better known as Millennials. Defined as those people born between 1980 and 2000. This puts most Millennials in their teens and twenties, and they also make up the biggest age grouping in American history at 80 million strong! According to research cited in the article, they're tech-savvy, entitled, lazy, and more likely to live with their parents after college than any previous generation. They're also innovative, have great relationships with their parents, eschew rebellion, are self-assured, and think more about issues than previous generations. At least the article states all those things and backs it up with various references to social studies and anecdotal stories. It's a fascinating article and one I think you would probably enjoy reading if you're teaching high schoolers  and college students or are raising teens.
The section that most interested me had to do with the rise in narcissism among this particular group of young people. According to the National Institutes of Health, 58% more college students scored higher on a narcissism scale in 2009 than in 1982. The article goes on talk about the relative isolation of this group in terms of socialization.


"The idea of the teenager started in the 1920s; in 1910, only a tiny percentage of kids went to high school, so most people's social interactions were with adults in their family or in the workplace. Now that cell phones allow kids to socialize at ever hour–they send and receive an average of 88 texts a day, according to Pew–they're living under the constant influence of their friends. 'Peer pressure is anti-intellectual. It is anti-historical. It is anti-eloquence," says Mark Bauerlein, an English professor at Emory, who wrote The Dumbest Generation: How the Digital Age Stupefies Young Americans and Jeopardizes Our Future (Or, Don't Trust Anyone Under 30). 'Never before in history have people been able to grow up and reach age 23 so dominated by peers. To develop intellectually you've got to relate to older people, older things: 17-year-olds never grow up if they're just hanging around other 17-year-olds.'"


For most homeschoolers, perpetually plagued with the "socialization" question, this should be music to your ears! The downsides of this form of social isolation are magnified by 24-hour access to social media that allows young people to fixate their relative social value in terms of quantifying "followers" and "likes". The downsides of this are many: anxiety fueled by the need for constant affirmation, a reduction in creativity, and a loss of empathy.

The article states that tests evaluating empathy showed a drop in scores beginning in 2000 "likely because of both a lack of face-to-face time and higher degrees of narcissism. not only do millennials lack the kind of empathy that allows them to feel concerned for others, but they also have trouble even intellectually understanding others' points of view."

I think that this serves as both a warning and encouragement for parents and teachers. For those of you who have decided to make alternative educational choices, who limit screen time, who try to fight against the onslaught of Facebook, Instagram, and SnapChat, you're doing your kids a great service. Helping your children to develop a relationship with technology that enhances, instead of burdening, is one life skill that will serve them well. Technology is here to stay and I value the fact that I can keep up with friends from around the world on Facebook, but it's always a balancing act for me. I have to insure that I'm using it as a tool, not being sucked into the vortex in which I've lost two hours checking status updates that I really do not care about.

For those of you who make sure your children are reading about other people, times, and places you're broadening their worlds and helping them to grow up to be caring, well-rounded adults. Keep it up!

And, there is a positive side. Millennials value parental input in ways the Baby Boomers never were able to. They're hard workers when given the opportunity to work. They are more likely to innovate in their places of work. And they have a world of job opportunities that did not even exist a decade ago. They also seem to be less materialistic and more prone to spend their money on experiences. These are all strengths and ought to be encouraged.

I would love to hear what you think. The article is on newsstands now and available to read online here. Are you the parent of Millennials? What has your experience been? How have you encouraged a broad view of the world? Have you had to fight against the tendency toward isolation? How has homeschooling helped or hindered this? 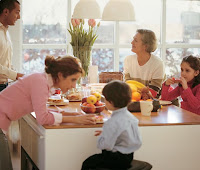 What is most important in education?

A discussion on education 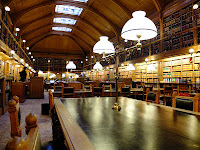 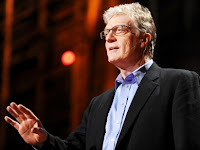 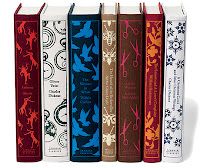 Don't forget to check out our Facebook and Pinterest pages. And if you've enjoyed this, please feel free to share using the buttons below!
Email ThisBlogThis!Share to TwitterShare to FacebookShare to Pinterest
Posted by Rebecca Manor at 1:14 PM

Labels: homeschooling and socialization, millennials, The Me Me Me Generation, TIme Magazine