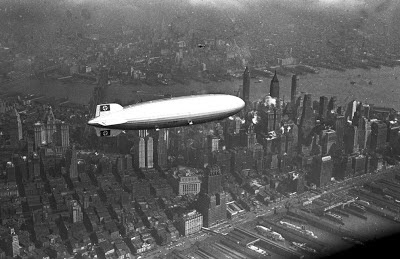 I'm a bit late in posting this but last week I noticed that several news outlets were marking the 75th anniversary of the Hindenberg Disaster. Like most people I had a vague knowledge of the large dirigible and in my mind I always related it to the Goodyear Blimp. But in skimming those headlines I picked up tidbits of additional information that I found really surprising. For instance, I really don't think I'd ever realized that the Hindenberg was able to cross the Atlantic and was considered a valid form of long-distance travel! And I had no idea that in the center of the huge dirigible there were cabins and a formal dining room. There was even a smoking room! I found all of this fascinating and thought I'd share it with you here.

The Hindenberg was built in Germany under the Nazi regime and was a sort of flagship for the technological advances made by government. Following the humiliating defeat of Germany during the First World War and the devastating economic sanctions and restrictions placed upon the defeated nation during the negotiations at Versailles, the Hindenberg was a great source of pride for the German people. It was a symbol to the world that their country was rising from the ashes and regaining its place in the world. Of course, the Nazi regime is now known for the Holocaust, inciting World War II and horrific crimes against the Jews and humanity. But in 1936 Hitler had not yet begun to institute his "Final Solution" and relations between the US and Germany were friendly enough that the Hindenberg's arrival was the cause of much fanfare.

For its day the Hindenberg set the standard for luxury air travel. Passengers could make the trip from Germany to the US in three days, half the time it took to travel by sea. Aboard the Hindenberg passengers had private cabins, were able to mingle in dining rooms and lounges. Due to the popularity of smoking at the time, the engineers managed to figure out a way to construct a smoking room, which proved to be one of the most popular places to spend time.

To give you a better idea of how this was all structured, here's several diagrams from www.airships.net, a fantastic website for those of you wanting to learn more about these fascinating air ships. You can click on any picture to enlarge. 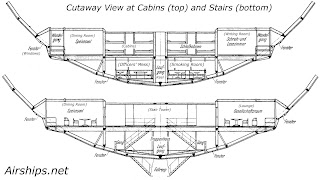 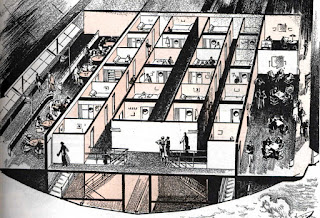 The interior was luxuriously decorated and appointed in a style one could describe as a pre-cursor to mid-century modern. 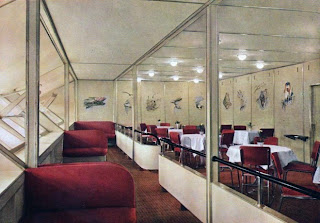 Port Promenade and dining room, with windows that could be opened! 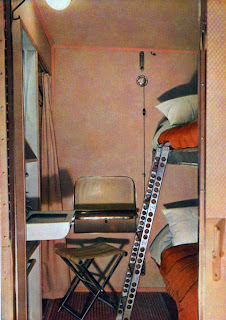 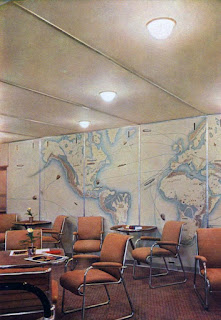 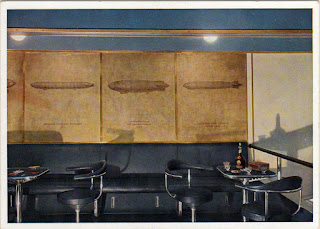 The smoking room, which was equipped with a single electric lights, and accessible only through two airlock doors. 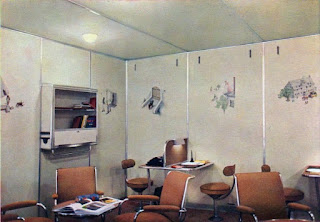 I find the photos with passengers and crewmembers to be fascinating: 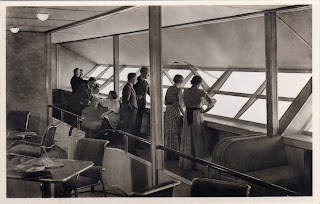 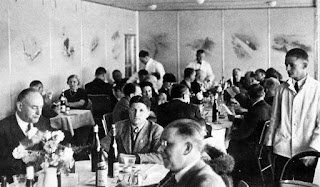 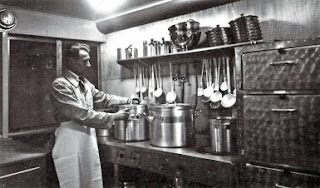 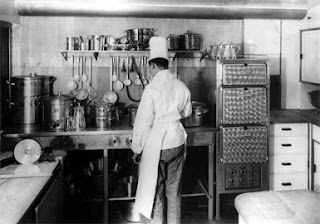 The Hindenberg made 10 successful commercial flights from Germany to the US, carrying a total of 1002 passengers. On May 6, 1937 it made it's way past New York City and for reasons still not fully known, burst into flames as it approached its landing post. Of the 97 passengers and crew aboard, 67 managed to survive. That accident marked the end of dirigible travel. The disaster was the first of its kind to be recorded on film, ushering in the era of documented tragedy. To see this video, you can watch the clip linked below. The first three minutes have some wonderful footage of the airship flying past New York City, making a successful landing, but it finishes with the fiery end of the Hindenberg. Watch here.

The following is an actual newsreel and does contain some footage that may be disturbing:

Websites for additional information:
Firsthand survivor account
Discovery of the lost map of the last journey
The Atlantic has a wonderful photo essay. Please note: there is one photo of a severely burned passenger that is not appropriate for youngsters.

For those of you wanting to learn more about this era in history, I suggest you check out the following books. 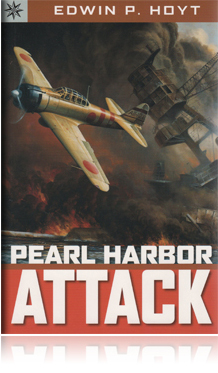 Don't forget to check out our Facebook and Pinterest pages. And if you've enjoyed this, please feel free to share using the buttons below!
Email ThisBlogThis!Share to TwitterShare to FacebookShare to Pinterest
Posted by Rebecca Manor at 11:45 AM