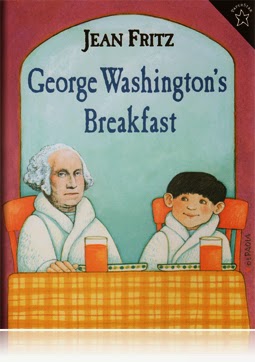 Box Day was here at last! As my husband opened the boxed marked “Beautiful Feet Books” we held ourselves in eager anticipation as to the contents inside. What would we find? Would we discover a new favorite? Would we be reunited with an old friend? As the box opened our six year old daughter eagerly began to dig through the contents exclaiming, “Books! Books! Look at all of the wonderful books!”  Eager to begin, she selected one of the D’Aulaire books, headed for the sofa announcing to our family, “It’s time to read!” As I looked through the books, my eyes were riveted to one book in particular, George Washington’s Breakfast by Jean Fritz, with illustrations by Paul Galdone. This particular title had been a favorite of mine during my second grade year of elementary school. Our teacher, Mrs. Sheridan had read it aloud to our class on President’s Day. As I touched the cover, I was reunited with an old friend whom I had not seen for over thirty years. While my husband and daughter were reading together from the D’Aulaire’s Ben Franklin I went to sit in my favorite chair to begin.

George Washington’s Breakfast tells the story of a young boy named, George W. Allen who is named after the Founding Father of our nation and who happens shares the President’s birthdate as well. Because of this coincidence, George is drawn to learn all he can about the historical events and details of his namesake’s life. However, there is one question which George W. Allen is unable to find the answer to: What did George Washington have to eat for breakfast? Thus, George sets out on his quest to learn the answer to this puzzling riddle. He enlists the help of the local librarian, Miss Willing, and his parents. During the search it is revealed that George Washington liked to count things like what 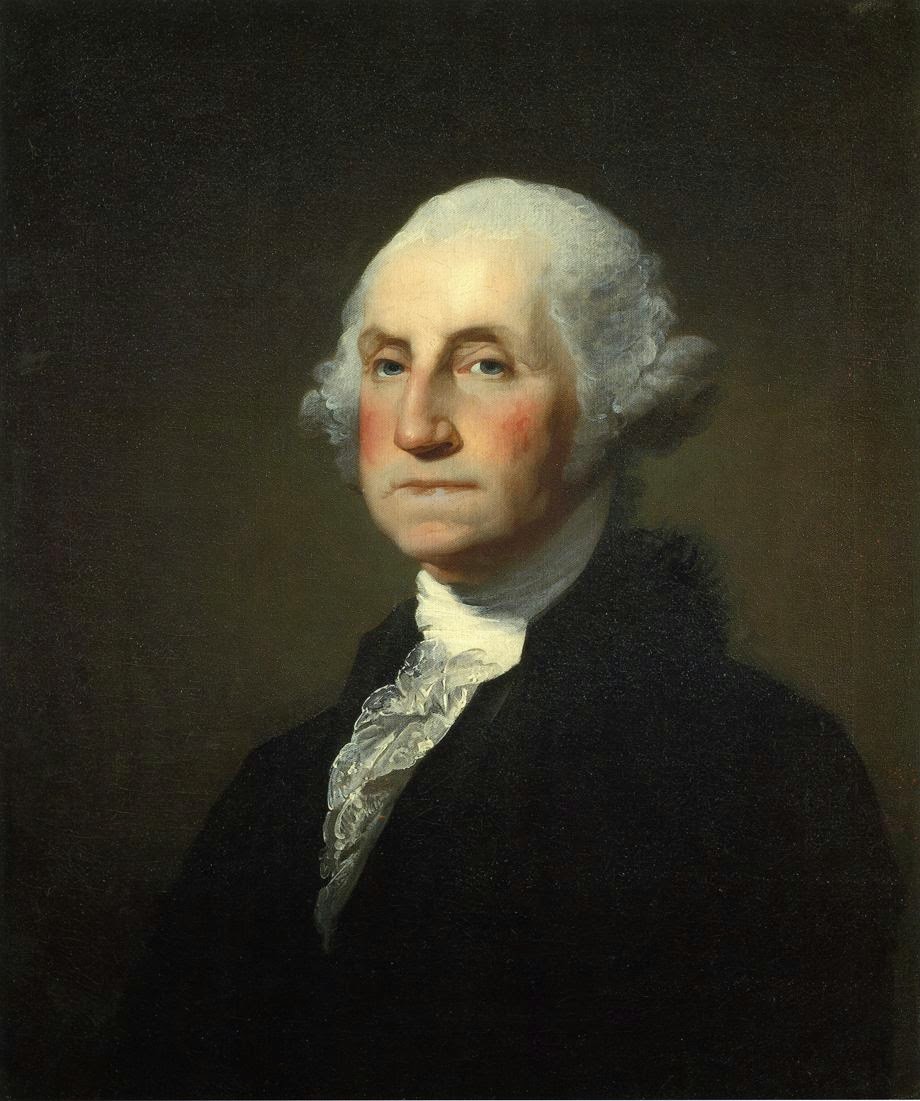 was served for breakfast in Washington’s time period but no hint is given as to what he actually ate for breakfast.

Determined not to give up, George W. Allen returns to the library where he and Miss Willing learned all sorts of interesting facts about our nation's first president but nothing about what he ate for breakfast. Encouraged by Miss Wiling, George and his parents visit the Smithsonian Institution and Mount Vernon in the hope of discovering the missing puzzle piece. However, George and his family return home without having solved the mystery of what Washington ate for breakfast. In the true style of his namesake, George Allen exclaims upon being told that he should maybe give up his quest, “Give up! You expect me to give up! George Washington’s soldiers were starving, and they didn’t give up. They were freezing, and they didn’t give up. What do you think I am?”1

Disappointed but determined, George retreats to the family’s attic for some peace and quiet. He notices a box beside him and begins to rummage through its contents. Within the box, he discovers an antique book titled, The American Oracle by Samuel Stearns. Within the pages he locates a chapter titled, “The Character of George Washington.” As he reads, he discovers the Founding Father of our country breakfasted on “three small Indian hoecakes and as many dishes of tea.”2 Elated with joy, George and his grandmother prepare and serve the family “George Washington’s Breakfast.”
I smiled as I closed the book. George Washington’s Breakfast was the book which allowed me to make the connection of historical facts being linked with a real person. A spark had gone off in my mind which burned into a flame. The main character in the book was a real person. Not a figure on a poster, a painting in a book, but a real, live person who had helped to shape and mold our country into the United States of America. I became consumed with the study of American historical figures from the perspective of a second grader. I perused the D’Aulaire's biographies: George Washington, Abraham Lincoln, Ben Franklin, and Pocahontas, the Discovery Biography Series and even the SRA Reading Lab Library. My desire to learn more about America’s historical figures led me to my first Scholastic Books purchases, The Adventures of George Washington by Mickie Davidson and True Stories About Abraham Lincoln by Ruth Belov Gross.

President’s Day 2006 dawned with a slate gray, winter sky. Inside our home, my daughter and I had gathered for a special story of the day. As I showed the book to my daughter, she exclaimed, “Look, Tomie dePaola drew the cover!” Snuggled together on the sofa, we began the story, “George W. Allen was proud of two things, his name and his birthday…" It was fun to watch my daughter as she traveled along with George W. Allen on his adventure to discover what the Founding Father of Our Country ate for breakfast. She was especially delighted with the illustrations by Paul Galdone, one of her favorite picture book illustrators. Afterwards, we went out to our kitchen to make hoe cakes just as George and his grandmother had done in the story. The hoe cakes were pronounced, “Delicious!” and consumed with fervor both by mother and daughter.

As I look back through time, this book has become part of our family’s fabric of life. It is an old friend; someone with whom we visit once a year to commemorate the American Spirit which founded our country, the United States of America. 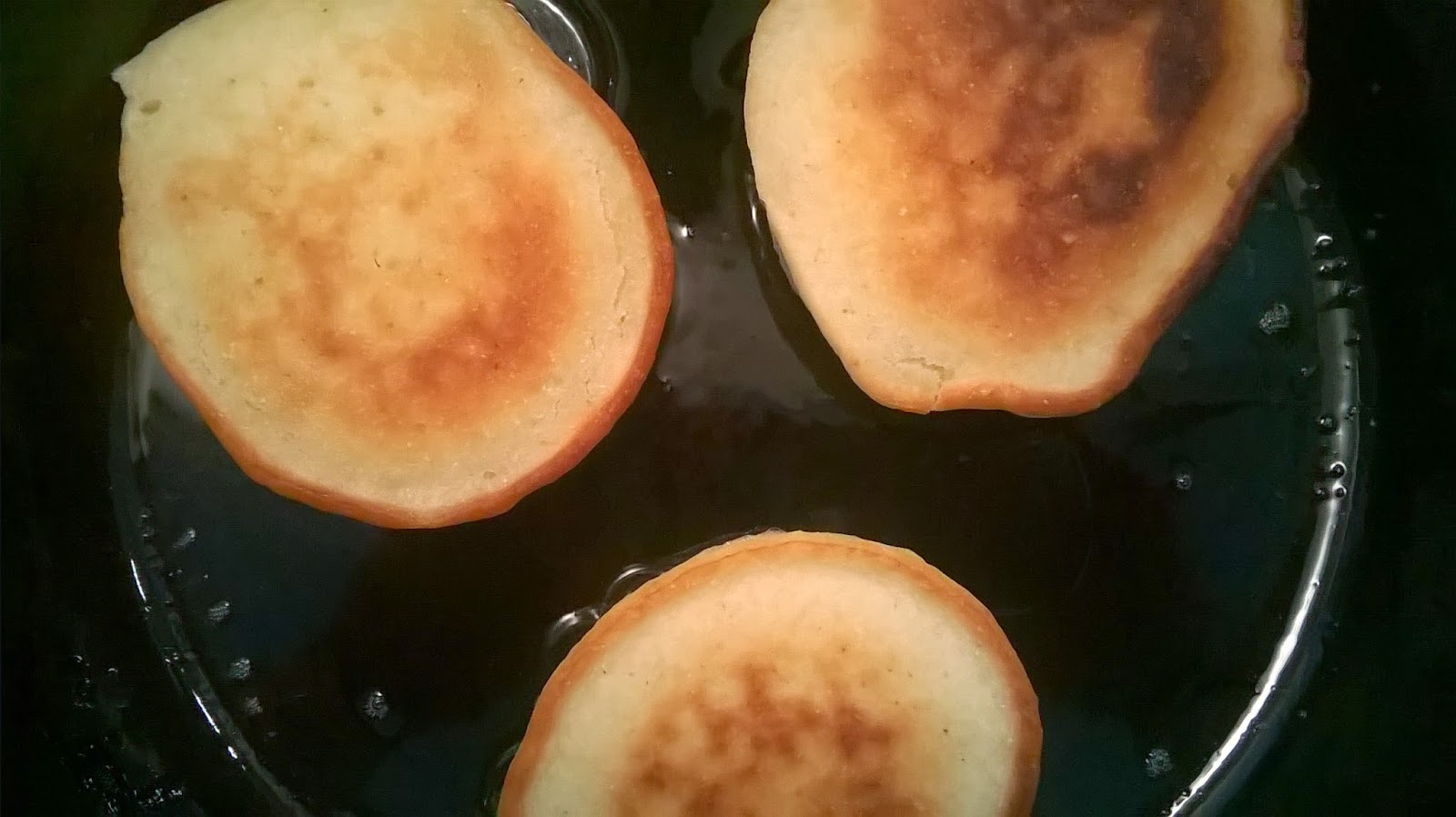 1/2 teaspoon salt
2 eggs
1 tablespoon sugar
¾ cup milk
1 tablespoon lemon juice
1/3 cup water
¼ cup vegetable oil
2 tablespoons vegetable oil for frying
Mix all ingredients together in a large mixing bowl, except the 2 tablespoons of vegetable oil. Stir with a wooden spoon until the mixture is smooth and free of lumps. Heat the 2 tablespoons of oil in a large skillet or griddle over medium heat. Spoon the batter (2 tablespoons) onto the hot skillet. Fry each hoe cake until it becomes crispy and brown. Flip with a spatula and brown the other side. Remove each hoe cake with a spatula, and set to drain on a paper towel lined plate. Serve hot with butter, maple syrup or honey.

2. Ibid.
Email ThisBlogThis!Share to TwitterShare to FacebookShare to Pinterest
Posted by Rebecca Manor at 11:19 AM