50th Anniversary of the JFK Assassination

Tomorrow, November 22, 2013 marks the 50th anniversary of the assassination of President John F. Kennedy. While I was not yet born when this happened, I grew up hearing people relay their memories of where they were when they heard that the president had been shot and I knew it was a day that changed the lives of many people. Regardless of your politics, the assassination of a president is always tragic. What any student of history should find incredible is that in our nation the sudden and unplanned loss of a leader does not lead to political collapse. So much has been written about JFK, his assassination and his legacy, I do not need to add my thoughts to the tomes of information available but I do want to recognize how incredible it is that our nation has survived the assassinations of four presidents without further violence, civil war, or government failure. When you consider that the horrors of the first World War can be traced back to the assassination of an archduke, or you look at the upheaval leading to the removal of rulers during the Arab Spring and the chaos that generally ensued, it is a truly remarkable fact. When the founders of our nation set up the apparatus to replace a fallen president they were helping to guard against the fear and anxiety that a nation feels when it has no leader. This system insures that we remember that our nation is not defined by a single leader or figurehead. Within one hour and eight minutes of Kennedy's death, LBJ was sworn into office aboard Air Force One. A few hours later he would address the nation as its new president. The transition was swift and effective in calming a nation galvanized by its loss.

For those of you wanting to learn more about JFK and that fateful November day, here are the best resources I've been able to find online.

JFK50
The best site I've found for comprehensive coverage of the events surrounding the assassination as well as retrospective interviews, photos, and more. 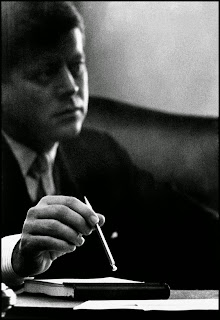 I would love to hear what you think! Chime in below in the comments section and share your thoughts. Don't forget to check out our Facebook and Pinterest pages.
And if you've enjoyed this, please feel free to share using the buttons below!
Email ThisBlogThis!Share to TwitterShare to FacebookShare to Pinterest
Posted by Rebecca Manor at 11:04 AM