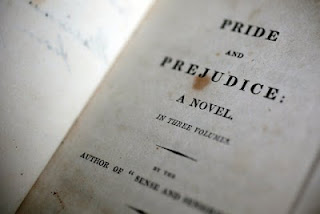 The internet has been abuzz with the news of the 200th anniversary of the publication of Jane Austen's Pride and Prejudice. Undoubtedly her most famous novel and one whose relevance only seems to increase as time passes, Pride and Prejudice has been firmly established as one of the classics. It's growing popularity in recent years has been helped along by movie adaptation, mini-series, bizarre sequels and retellings (including one that involved zombies). While I'm a purist when it comes to the stories and I refuse to read any of the many "sequels" that contemporary writers have put forth (in my mind it's pure arrogance on the part of any writer to attempt to "finish" the story of Elizabeth and Darcy), I have enjoyed some of the movie adaptations. The BBC version with Colin Firth and Jennifer Ehle is second to none. In my opinion later film versions have been wanting and the idea of casting Keira Knightly in the role of Elizabeth was unpardonable although there are people in my family who would disagree. Anyway, Jane Austen's ability to create distinct characters who are fully developed, unique, and able to express themselves in entirely different voices is nearly unparalleled. The fact that the world is celebrating this book 200 years after its publication bears witness to the universality of its themes, it's ability to capture human nature and the imagination. So much more than a love story, Austen provides commentary on human ambition, our ability to deceive ourselves, the folly of human pride, social structures, wealth, gender roles, and so much more. Here's some of the fun things that have been popping up in celebration. Enjoy!

Pride and Prejudice Hypertext: wonderfully useful guide to each character and all the ins and outs of the plot.

The peaks and troughs of Darcy and Elizabeth's popularity over time: interesting info-graphic from the Economist.

Pride and Prejudice Movie Roundup: clips and commentary on the four movie versions.

The best covers: an excellent slide show featuring the best cover designs for the various editions of Pride and Prejudice. One has a spelling error, can you spot it? 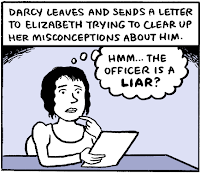 Brief illustrated version of Pride and Prejudice: in honor of the bicentennial, Jen Sorensen came up with clever version.

Jane Austen's Regency World: a fun source of information on all things Austen.

Don't forget to check out our Facebook and Pinterest pages. And if you've enjoyed this, please feel free to share using the buttons below!
Email ThisBlogThis!Share to TwitterShare to FacebookShare to Pinterest
Posted by Rebecca Manor at 11:09 AM