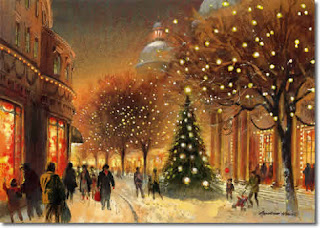 I recently attended a Charles Dickens Christmas Party and in order to mark this wondrous day of anticipation, Christmas Eve, I thought I would share the passage I read at the party. It's one of Dicken's few selections on Christmas that appear outside of A Christmas Carol, and when I found it, I knew it was perfect. It captures so much of what we love about this time of year, the feelings it engenders, and the way it draws people together. I hope you enjoy it! It is taken from The Pickwick Papers, Chapter 28:

As brisk as bees, if not altogether as light as fairies, did the four Pickwickians assemble on the morning of the twenty-second day of December, in the year of grace in which these, their faithfully-recorded adventures, were undertaken and accomplished. Christmas was close at hand, in all his bluff and hearty honesty; it was the season of hospitality, merriment, and open-heartedness; the old year was preparing, like an ancient philosopher, to call his friends around him, and amidst the sound of feasting and revelry to pass gently and calmly away. Gay and merry was the time; and right gay and merry were at least four of the numerous hearts that were gladdened by its coming.
And numerous indeed are the hearts to which Christmas brings a brief season of happiness and enjoyment. How many families, whose members have been dispersed and scattered far and wide, in the restless struggles of life, are then reunited, and meet once again in that happy state of companionship and mutual goodwill, which is a source of such pure and unalloyed delight; and one so incompatible with the cares and sorrows of the world, that the religious belief of the most civilised nations, and the rude traditions of the roughest savages, alike number it among the first joys of a future condition of existence, provided for the blessed and happy! How many old recollections, and how many dormant sympathies, does Christmas time awaken!
We write these words now, many miles distant from the spot at which, year after year, we met on that day, a merry and joyous circle. Many of the hearts that throbbed so gaily then, have ceased to beat; many of the looks that shone so brightly then, have ceased to glow; the hands we grasped, have grown cold; the eyes we sought, have hid their lustre in the grave; and yet the old house, the room, the merry voices and smiling faces, the jest, the laugh, the most minute and trivial circumstances connected with those happy meetings, crowd upon our mind at each recurrence of the season, as if the last assemblage had been but yesterday! Happy, happy Christmas, that can win us back to the delusions of our childish days; that can recall to the old man the pleasures of his youth; that can transport the sailor and the traveller, thousands of miles away, back to his own fireside and his quiet home!


All of us here at BFB wish you a very happy and blessed Christmas! We hope you find some wonderful literary treasures underneath the tree. We would love to hear about them, so share in the comments below.


For unto us a child is born, unto us a son is given; and the government shall be upon his shoulder: and his name shall be called Wonderful, Counsellor, Mighty God, Everlasting Father, Prince of Peace.

Email ThisBlogThis!Share to TwitterShare to FacebookShare to Pinterest
Posted by Rebecca Manor at 12:20 PM