Seventy-one years ago today, Pearl Harbor was attacked by the Japanese military and America's role in the second World War was escalated to full involvement. Immortalized by President Franklin D. Roosevelt as a "date that will live in infamy" this tragic event was the impetus for a decisive shift in American military action. Almost immediately American soldiers were preparing to ship off to a war ravaged Europe while thousands more were sent to the Pacific theater. In order to help you learn more about this event, I wanted to share some fascinating resources that are available online.

You can listen to FDR's famous speech here. I found it fascinating as it reminded me that the attack on Pearl Harbor was one prong of a many faceted attack on many Pacific countries and islands. On this website you can view handwritten drafts of FDR's first drafts of the speech and see photos of him signing the declaration of war. You can read articles from newspapers reporting the events here. Photos of the attack can be seen here. For those of you wanting to dig deeper, here are our favorite books that deal specifically with the Pacific Theatre of World War II. 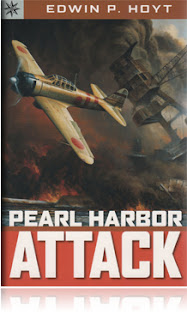 Pearl Harbor Attack by Edwin P. Hoyt
The dramatic story of the sneak attack by the Japanese Navy on the U.S. Naval Base in the Hawaiian Islands. In minutes the U.S. Pacific fleet was all but destroyed and WWII began for the our country. War correspondent Edwin P. Hoyt takes us from the secret preparations in Japan to the flaming wreckage and tragedy of Pearl Harbor. 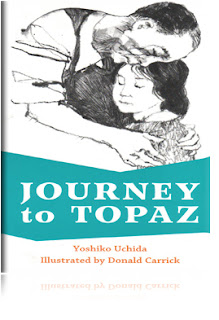 Journey to Topaz by Yoshiko Uchida
Story of one Japanese family during the relocation of 120,000 Japanese after the bombing of Pearl Harbor. Bittersweet, yet noble, presentation of this tragic episode in American history.
Like any 11-year-old, Yuki Sakane is looking forward to Christmas when her peaceful world is suddenly shattered by the bombing of Perl Harbor. Uprooted from her home and shipped with thousands of West Coast Japanese Americans to a desert concentration camp called Topaz, Yuki and her family face new hardships daily. 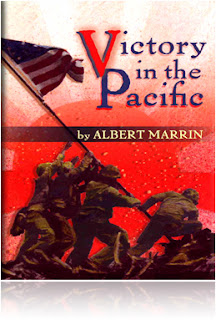 Victory in the Pacific by Albert Marrin
Victory in the Pacific covers events from the surprise attack on Pearl Harbor through the battles of Midway, Guadalcanal, the Solomon Islands, Savo Island, the Doolittle raid on Tokyo, Corregidor Island, Leyte Gulf, Iwo Jima , and Okinawa. In each case, readers see the battles through the eyes of the men who were there, landing on the beaches, running raids in PT boats, dodging kamikaze bombers, and flying missions over Japan. In an easily accessible style, Marrin relates not only the important details of these conquests but also explains the military strategies of both the Allied forces and the Japanese. Readers get an overarching view of the war that helps to bring understanding especially as American forces drew increasingly closer to Japan and the Japanese grew ever more determined to fight to the bitter end. Marrin helps readers to understand the Japanese mindset that made surrender impossible and ultimately led to the decision to drop the atomic bomb in the interests of saving millions of lives. For the young adult reader, or even an adult unfamiliar with this period of WWII history, this book provides a sobering but inspiring look and the men and women , the nations and ideologies, that battled over half a century ago in the Pacific theater. Illustrated with diagrams, maps and photographs. 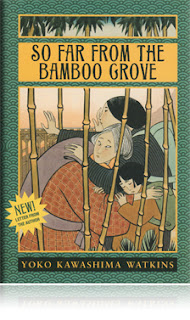 So Far From the Bamboo Grove by Yoko Kawashima Watkins
Though Japanese, eleven-year-old Yoko has lived with her family in northern Korea near the border with China all her life. But when the Second World War comes to an end, Japanese on the Korean peninsula are suddenly in terrible danger; the Korean people want control of their homeland and they want to punish the Japanese, who have occupied their nation for many years. Yoko, her mother and sister are forced to flee from their beautiful house with its peaceful bamboo grove. Their journey is terrifying — and remarkable. It's a true story of courage and survival. Our boys loved it! 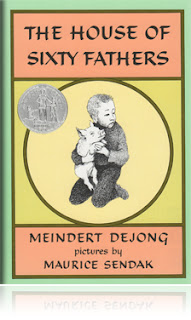 The House of Sixty Fathers by Meindert DeJong
Tien Pao is all alone in enemy territory. Only a few days before, his family had escaped from the Japanese army, fleeing downriver by boat. Then came the terrible rainstorm. Tien Pao was fast asleep in the little sampan when the boat broke loose from its moorings and drifted right back to the Japanese soldiers. With only his lucky pig for company, Tien Pao must begin a long and dangerous journey in search of his home and family. 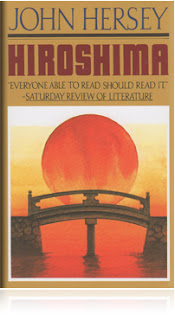 Hiroshima by John Hersey
On August 6, 1945, Hiroshima was destroyed by the first atom bomb ever dropped on a city. This book, John Hersey's journalistic masterpiece, tells what happened on that day. Told through the memories of survivors, this timeless, powerful and compassionate document has become a classic "that stirs the conscience of humanity." - The New York Times
Almost four decades after the original publication of this celebrated book, John Hersey went back to Hiroshima in search of the people whose stories he had told. His account of what he discovered about them is now the eloquent and moving final chapter of Hiroshima. 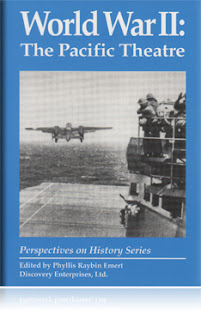 World War II: The Pacific Theatre
Japanese and American documents dealing with the origins of the war, the attack on Pearl Harbor, and the major battles of the Coral Sea, Midway Island, Guadalcanal, Iwo Jima, and others, reveal an interesting perspective.

Email ThisBlogThis!Share to TwitterShare to FacebookShare to Pinterest
Posted by Rebecca Manor at 11:05 AM