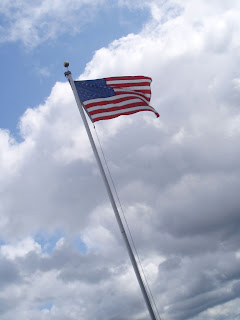 Across Europe and the US, November 11th is a day set aside to remember those who have served in our armed forces and have paid the ultimate price in the defense of liberty. In the UK the day is informally known as Poppy Day and in the weeks leading up to November 11, people pin poppies to their lapels in remembrance of the armistice that ended World War I on the western front. The poppies, of course, are in reference to Lt. colonel Joh McCrae's beautiful and haunting World War I poem, In Flander's Field.

In Flanders fields the poppies blow


Between the crosses, row on row,
That mark our place; and in the sky
The larks, still bravely singing, fly
Scarce heard amid the guns below.


We are the dead. Short days ago


We lived, felt dawn, saw sunset glow,
Loved, and were loved, and now we lie
In Flanders fields.


Take up our quarrel with the foe:


To you from failing hands we throw
The torch; be yours to hold it high.
If ye break faith with us who die
We shall not sleep, though poppies grow
In Flanders fields.

"To us in America, the reflections of Armistice Day will be filled with solemn pride in the heroism of those who died in the country's service and with gratitude for the victory, both because of the thing from which it has freed us and because of the opportunity it has given America to show her sympathy with peace and justice in the councils of the nations."

On May 13, 1838, a Congressional Act made the 11th of November a legal holiday stating it was "a day to be dedicated to the cause of world peace and to be thereafter celebrated and known as 'Armistice Day'."

In 1945, Raymond Weeks, a World War II veteran lobbied for a change in the holiday. Instead of being known as Armistice Day, he advocated a national day to recognize all US veterans. Gen. Dwight Eisenhower supported Week's cause and in 1947 the first national Veterans' Day was celebrated.
Across America there will be events commemorating the men and women who have served our country in the armed forces. It is often customary to set aside a moment of silence at 11am to mark the end of the first world war and many of you will live in towns where you will be able to attend parades, listen to speeches from veterans and elected officials.
Following the divisive election, it is a good reminder to set aside a moment to remember we are all united as Americans and we owe much to those who came before us. Today is a day to honor those who serve us, to pray for them, and to pray for an end to all war.
In case you missed it:

Email ThisBlogThis!Share to TwitterShare to FacebookShare to Pinterest
Posted by Rebecca Manor at 9:15 AM