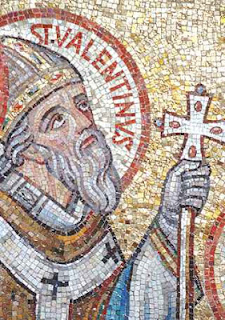 As we exchange candy hearts, pink and red cards, and maybe book a table at a special restaurant to mark Valentine's Day with a loved one, it's fun to consider the history of this day. It's a bit mysterious and confusing, but worth looking into.

February has long been a month associated with romance. During the days of the Roman Empire the ides of February, or February 15 was known as Lupercalia, a fertility festival dedicated to the god Faunus, the Roman god of agriculture. Over time, as Christianity spread many of these pagan holidays were Christianized and set aside as Feast days. In 496 AD Pope Gelasius set aside February 14th to celebrate the martyrdom of Saint Valentine. And who was Saint Valentine? This is where it gets confusing!

Apparently there are three Saint Valentines! Each was martyred for refusing to give up his faith and there are several stories about these brave men. The story that fits most neatly with the Valentine's Day theme is about a Roman priest who was martyred during the reign of Claudius II. Apparently, Claudius had decided that single men made better soldiers and had outlawed marriage for all men enrolled in military service. Valentinus saw the injustice of this and conducted secret marriage ceremonies for these young soldiers and their fiancés. In addition to this crime, he was caught aiding Christians and performing Christian marriage services, both criminal acts under Claudius' persecution of Christians. Valentinus was arrested and kept in prison. During his imprisonment, Valentinus became close enough to Claudius to try to convert him! This was the act that led to his death. He was tortured and beaten but refused to recant his faith. In 269 AD he was beheaded outside the Flaminian Gate.

Other stories tell of another Valentinus who was imprisoned for trying to help persecuted Christians escape from Roman prisons. In prison Christians faced harsh conditions and torture as the Roman authorities tries to squelch the rapidly spreading faith. It is said that while in prison on the night before he was scheduled to be executed, Valentinus sent a letter to a young woman he loved and he signed it "From your Valentine" unwittingly starting a tradition that continues to this day!

Today Valentine's Day is celebrated around the world and is an official feast day in the Anglican and Lutheran Churches.

I found this chart from history.com to be a very interesting info-graphic on the history of Valentine's Day. View the original here.

All of us at BFB wish you a very happy Valentine's Day!
Email ThisBlogThis!Share to TwitterShare to FacebookShare to Pinterest
Posted by Rebecca Manor at 11:46 AM